Home » Celebrities » How Will BTS Accept Their Grammy Award (if They Win, of Course)

How Will BTS Accept Their Grammy Award (if They Win, of Course) 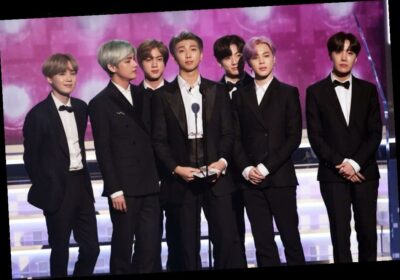 RM, Jin, Suga, J-Hope, Jimin, V, and Jungkook are once again making Grammy history — even from overseas. With their first nomination and their first original song performance at the upcoming ceremony, fans look forward to plenty of content from the BTS members.

Here’s what the members said about how they’re watching the award show.

BTS will not physically attend the 2021 Grammy Awards

Although 2021 is the first time BTS earned a Grammy nomination, the group will not attend the award ceremony in person, due to the coronavirus (COVID-19) pandemic and safety concerns. They will, however, watch the award show live.

“The awards ceremony is going to be very early hours in Korea, so there is really not much that we can do early in the morning,” Suga said during an interview with the Associated Press. “But we’ll probably have a glass of wine or maybe and do something in the morning, whatever we can do.”

“Hug each other once,” V added. It’s still unclear when, or how, BTS will get their Grammy Awards if they win. (For the Emmy Awards, presenters went to the winners’ homes to deliver to award in person.) Fans do know, however, that the group will perform a song at this award show.

BTS is performing at the 2021 Grammy Awards

In 2020, BTS performed “Old Town Road” alongside Lil Nas X and other celebrities. This year, however, is the first time BTS will perform an original song on the virtual Grammy stage, making them the first K-pop group to do so.

BTS is nominated for their first Grammy Award

This K-pop group first learned of their Grammy nomination in the “Best Pop Duo/Group Performance” category months prior to the award show. This nomination was for their song “Dynamite,” released during summer and later added to the group’s album, Be (Deluxe Edition.) If they win, BTS will be the first K-pop group to earn a Grammy Award.

“If we win, it’ll be a success which we made together,” RM said. “Like it’s between we and ARMY so all we could do is turn the live streaming on and have a ceremony with ARMY all over the world, sip a cup of champagne, glass of wine. That’s all we could do.”

When BTS first found out they were nominated, the members shared a video of their reaction to Twitter and YouTube. Jimin and RM jumped up, excited, while Jungkook started clapping and V starred in shock. Because of the time difference, J-Hope was sleeping at the time but reacted to the announcement afterward.

The Grammy Awards air live on March 14. Until then, fans can watch the “Life Goes On” music video by BTS on YouTube.