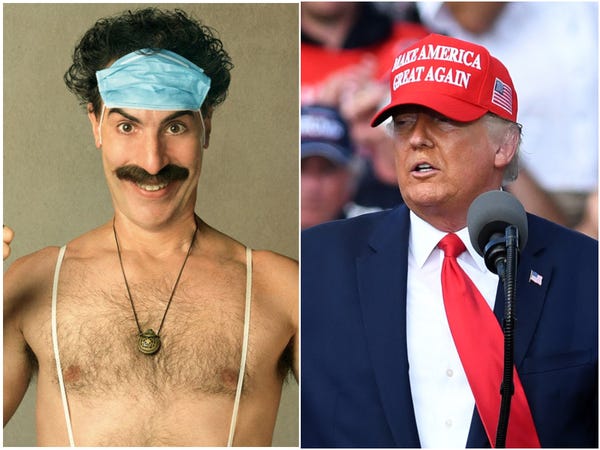 Borat has taken over the world. Again.

For the second time, the fictional Kazakh journalist has emerged as the media's most talked-about figure. The only competition Borat has for that title currently is the man behind his genius-level antics — Sacha Baron Cohen himself.

The filmmaker, personally, was having a good year anyway before "Borat Subsequent Moviefilm" was released earlier this year on Amazon Prime. He appeared in Aaron Sorkin's Netflix ensemble courtroom drama, "The Trial of the Chicago 7," as influential hippie activist Abbie Hoffman.

Baron Cohen not only earned great reviews, but some of the best of his career. In fact, Insider called his performance the very best of his entire filmography. The filmmaker turned in a semi-serious performance as the activist, meshing his expectedly perfect comedic timing with a dramatic nuance. It's the sort of role that is primed for the Oscars.

But with his new mockumentary, the sequel to 2006's "Borat," Baron Cohen sets his sights on something even larger than the Academy Awards: the US presidential election.

In a masterclass of movie marketing, Baron Cohen and his team essentially hijacked the political conversation at one of the most important moments in US history. Here's how they did it.

The movie came as a complete surprise

In 2007, Baron Cohen said he had retired the character of Borat, so no one was expecting another appearance from the Kazakh character, let alone a movie sequel. The actor did make a couple of appearances as Borat, including one in 2018 to encourage people to vote in the midterm elections, but there was still no mention of a sequel.

So it came as a surprise when Borat was spotted filming last summer. This slyness allowed "Borat 2" to be announced with maximum impact, catching everyone by surprise and landing with aplomb.

But "Borat" arrived with no notice and no build-up — just excitement. It felt like a statement in itself: "Borat" is here when no one else is.

The film's release date is a statement in itself

It's typical for a movie or TV show to release in time for a major event like an election, and this year has been no different.

Several documentaries, including "Totally Under Control" and "American Selfie: One Nation Shoots Itself" have been released, while Aaron Sorkin has been involved in two big releases tied to this election: a "The West Wing" reunion special and "The Trial of the Chicago 7."

So when "Borat Subsequent Moviefilm" was released on October 23 so close to the US elections, November 2, Baron Cohen was sending an obvious message for voters to pay attention.

Insider spoke to entertainment marketing expert Stacy Jones of Hollywood Branded, who said that "the timing certainly leverages major news cycles who are looking for new coverage angles. The film content and subject matter offer what many find as humorous content and provides easy new headline and late night talk show content to play off of."

Essentially, the movie is a goldmine for media outlets looking for hits in one of the most competitive moments of the year.

Baron Cohen told The New York Times he initially struggled to get the film released ahead of elections. Potential streamers were apparently worried since the film mocks right-wing citizens, who've downplayed the novel coronavirus, and also shows one pro-choice counselor encouraging Borat's fictional onscreen daughter to "keep" her baby (it was a plastic baby) although it was insinuated that she'd been molested by Borat.

But thanks to Amazon, Baron Cohen got his wish.

"We wanted it to be a reminder to women of who they're voting for or who they're not voting for," Baron Cohen said. "If you're a woman and you don't vote against this guy, then know what you're doing for your gender."

Fans couldn't get away from Borat thanks to floats, yoga workouts, and social media

And with the might and money of Amazon Studios behind it, "Borat Subsequent Moviefilm" was able to pull off some of the biggest promotional stunts we've ever seen. There've been barges and floats heading down the River Thames in London, as well as a statue erected in Sydney. Borat lookalikes were also hired to do yoga on an Australian beach.

Marketing expert Jones revealed that "according to media monitoring software, Critical Mention, the coverage created across TV, internet and radio, regarding Rudy Giuliani [who appears in the film] and Borat has reached over 78 billion impressions … with a media value of over $3 billion."

Jones added that these enormous figures don't even take into account social media coverage, meaning the real value of the media attention around Baron Cohen and Borat is even higher.

First, a fake Kazakhstan government account was created, which started promoting "Borat" at the end of September when it live-blogged the debate. The account poked fun at Democratic presidential candidate Joe Biden and also tore Donald Trump, running for re-election, down.

The tweets, and the account, were later suspended, but it was effective.

Through Twitter, Instagram, TikTok, a Reddit Ask Me Anything session and a Twitch stream with Dua Lipa, Borat has flooded the internet with his presence and unmistakable brand of humor.

"Baron Cohen's films are designed to bring awareness to problems he sees in the ways people act," Jones told Insider, adding that while the film is "certainly" a political commentary, "it's sole purpose is not to be positioned as 'the film of the current political climate,' but instead a content showcase of what Cohen finds repugnant."

The most talked-about stunt in the movie, undoubtedly, is the one involving former New York City mayor and President Trump's personal lawyer, Rudy Giuliani.

Giuliani was duped into a fake interview with Tutar, Borat's 15-year-old daughter, played by 24-year-old actress Maria Bakalova. At the end of the interview, Tutar and Giuliani go into her hotel bedroom where Giuliani asks for her number and address. He's also seen with his hands down his trousers. Giuliani later said he was tucking in his shirt.

What has been almost as extraordinary as the stunt itself, is the media furror surrounding the prank, led by Borat himself.

"Borat continues to buffoon Giuliani by creating additional content 'in support' of Giuliani, which at its core continues to poke fun at the behavior he finds questionable," Jones told Insider.

One example is after Giuliani had dismissed the prank as a "fabrication," Borat himself responded.

"I here to defend America's Mayor, Rudolph Giuliani. What was an innocent sexy-time encounter between a consenting man and my 15-year-old daughter has been turned into something disgusting by fake news media," he said. "I warn you. Anyone else try this and Rudolph will not hesitate to reach into his legal briefs and whip out his su-penis."

This is typical of Baron Cohen, who is not just a wily and wise comedian, but also a complete clown. That's not an insult: Baron Cohen literally attended clown school. At École Philippe Gaulier, Baron Cohen trained to be a clown and credits his career to Gaulier himself, telling the Telegraph: "Without him, I really do doubt whether I would have had any success in my field."

It's this training that enabled Baron Cohen to successfully create the characters for which he's so famous, including Ali G, Bruno, and Borat.

Borat even got the attention of the US president

If you ever needed proof of the high-reaching effect of the movie, look no further than the president of the United Status.

As reported by Voice of America's Steve Herman, when asked about the Giuliani footage in "Borat 2," Trump dismissed the stunt.

"I don't know what happened. But years ago, you know, he (@SachaBaronCohen) tried to scam me and I was the only one who said no way. That's a phony guy and I don't find him funny."

Although the president couldn't resist attacking Cohen, in doing so, Trump proved that "Borat 2" had the desired effect: ruffling feathers in the highest office.

"President Trump has consistently showcased a need to weigh in on trending topics that negatively
portray his loyal supporters. Baron Cohen has leveraged these interactions with both President Trump and
Giuliani to continue to keep his film and message in front of the media, in order to garner more
awareness overall as both a marketing and political commentary strategy," marketing expert Jones told Insider.

It is interesting, however, that Baron Cohen did not respond to POTUS as Borat, as he did with the Giuliani response. Instead, he repsponded via his own personal Twitter account.

"Donald — I appreciate the free publicity for Borat! I admit, I don't find you funny either. But yet the whole world laughs at you," he wrote on October 24. "I'm always looking for people to play racist buffoons, and you'll need a job after Jan. 20. Let's talk!"

Again, Baron Cohens tactics were clear — undermining the person in power with wit and awareness.

Jones said the actor likely responded as himself "to ensure that he put the power of his own self behind his commentary so the comedy was removed and his own truth could be heard."

The value of Borat is clearly huge.

If, as Jones said, the movie's main goal was to poke fun at those Baron Cohen finds repugnant then that's definitely been achieved.

It remains to be seen whether any larger goal has been successfully fulfilled, but this movie serves as a timely reflection of the political climate. We'll just have to wait to see if that climate will change.