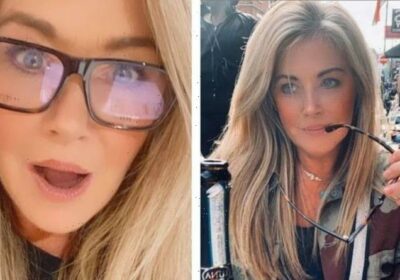 Lucy Alexander spends the night in hospital with her daughter

“Just had to do one of these [Covid tests],” she croaked, “but luckily it’s negative – I’ve just got a bad cold.”

The much-celebrated Homes Under The Hammer host appeared to have an audibly congested nose and throat as she presented the anger-inducing letter that had just made her day even worse.

“I’ve just opened [this] letter [saying] I’ve got a fine from the police – I was doing 28 miles an hour!” she protested.

“Thank you for that – speed awareness course, here we come!”

This isn’t the first time Lucy has received a driving-related fine – and perhaps it doesn’t help that she is a regular on the Dartford Crossing, which has been branded the most dangerous road in Britain.

The surrounding A282, which connects Kent and Essex, clocked up nearly 27,000 speeding offences last year, and delays often occur at the hugely over-congested Dartford tunnel after crashes and collisions.

Yet, even some of the methods taken to ease congestion there, such as removing toll booths and expecting drivers to pay electronically, have still caused Lucy trouble.

She angrily tweeted in February that she’d been fined £215.

One fan joked in reply: “Christ Lucy, if you leave it much longer you can purchase the bridge!”

If paid on time, the toll charge should be just £2.50, but Lucy lamented: “I’m not good with this modern world. Still use cheques.”

The anguished presenter admitted she “hated” speeding awareness courses, implying that it may not be the first time she has endured one.

Luckily for Lucy, whose clinically vulnerable daughter Kitty received her doses of the AstraZeneca vaccine a few months ago, she has not contracted coronavirus – but she was still seething with frustration at the police attention she’d received.

Fortunately, something else was delivered through her letterbox which she believed had softened the blow.

“These couldn’t have arrived at a better time,” she revealed in an Instagram video, while clutching a box of “pure Scottish seaweed” supplements.

“These focus on all things to help the menopause – hormonal activity, reduction of tiredness, fatigue, mental performance, cognitive function…

“I’ll be sending some of these to my friends,” she explained, adding: “Because we have all walked into that wonderful thing called the menopause!”

Hormones aside, the property expert has suffered her fair share of upset in recent months after her youngest daughter, Kitty, who was left paralysed after a virus attacked her spinal cord nearly a decade ago, was admitted to hospital for “a week’s rehab”.