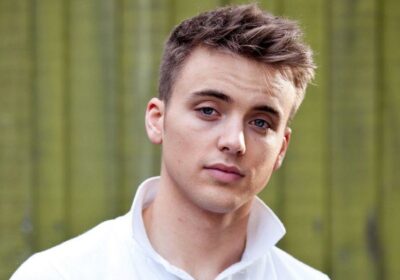 Parry Glasspool and his fiancée Paije Love have welcomed a baby girl together.

The Hollyoaks actor and his partner were overjoyed to welcome the little newborn into the world and have named her Efa Love Glasspool.

Sharing the news with fans on Instagram, the 29 year old posted an image of his wife-to-be holding the adorable tot’s hand in his stories.

“Oooof, finally!” the former soap star wrote over the top, tagging Paije underneath.

He obscured half of his baby’s face in the picture, so fans could see the little one’s cheeks, an ear poking out and some tufts of silky brown hair.

The tot was wrapped in a cute white baby grow and featured an embroidered design of a grey elephant on the front.

In a repost from Paije’s story, Parry could be seen cuddling his newborn close to his side as she slept nestled up under an exquisite crochet blanket.

“How have we only had her for one day? I feel like she’s always been with us,” Paije posted next to the snap.

“Cuddles with Dad before we put her down to bed,” the stunning blonde also captioned.

Last month, Paije slipped into a ribbed camel maxi dress for a day out to celebrate her and Parry’s impending arrival.

Next to a snap of her cradling her bump, Paije beamed as she told fans: “Had the best day celebrating our baby girl Makeup – @georgiafaith_mua.”

A week ago, the adorable couple also found the time to celebrate “one last date night” together.

Paije was excited as she looked forward to them becoming “mum and dad”.

Since Efa’s arrival, Paije has she been sharing various updates with her followers, with one of her latest stories showing the former soap star holding his daughter after no sleep and “night feeds”.

Parry played Harry Thompson on Hollyoaks from 2015-2019, and was critically-acclaimed for his role.

The star was nominated for best newcomer at the 21st National Television Awards in his second year, but his character was sadly killed off in an explosive series of episodes after four years in the role.