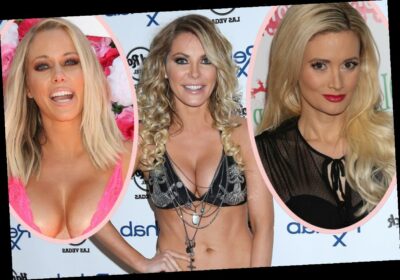 A new Playmate has joined the fight!

If you haven’t seen, Holly Madison and Kendra Wilkinson have kicked up something of a feud over a decade after the end of The Girls Next Door.

The models were co-girlfriends (is that the right term?) of Hugh Hefner back in the 2000s, along with third GF Bridget Marquardt. But the drama from those days clearly still weighs heavily on Holly, who opened up this week on the Call Her Daddy podcast about the pain and depression she suffered in those days.

Most of what she spoke about was Hef and his allegedly abusive and even creepy tendencies with the women he dated. It was basically the most common of complaints we hear about straight guys — he refused to pleasure women, got scary jealous, made unreasonably selfish and demeaning demands — but hey, with Playboy‘s decades of influence, it’s possible he was actually the architect of the modern bad boyfriend.

Anyway, back to Holly’s tea. The thing is, she also had a lot to say about how the women at the Mansion treated one another — and almost none of it complimentary. She said:

“It was really cutthroat, nobody got along, everybody tried to snitch on the other… Nobody really wants to help anybody out. Everybody wants a centerfold or more money.”

Only Bridget got pointed out as the exception. Holly said she always got along with Bridget.

As for Kendra, she made clear the answer was “NO,” they do not still have any kind of friendship.

We guess that rubbed the Kendra On Top star the wrong way because she responded on Instagram just hours later:

“In response to her, but times have changed. I forgive and have kids to love and focus on

While she made it clear she thinks it’s ridiculous to rehash any of this 15 years later, she also allowed for the possibility it affected her former roommate in a different way, saying she wished she “had more time with Holly to understand this side.”

OK, bad blood maybe, but nothing that can’t be fixed. The Girls Next Door have grown into some very mature women it seems.

Well, it’s not over. Crystal Hefner, who started dating Hef after Holly left — and actually went through with marrying him — had to weigh in, too.

Writing on her paywalled social media app MeWe on Thursday, she pointed out just how much she felt all this was ancient history:

“I was at the mansion for a DECADE almost four years ago now and these ladies and their drama were there years before that. I side with Kendra here.”

The 34-year-old — who started dating Hef and joined the Girls Next Door cast when she was just 23 — seems to think ALL the women who gave their early 20s to the Playboy founder should be GRATEFUL! She wrote:

“Not sure why these women who shared an incredibly uncommon and rare experience (that will never be repeated in our lifetimes) can’t get along? Maybe for the same reasons Holly and Bridget despise me for absolutely NO reason. I hope one day we can all get along and compare experiences.”

Welp! She clearly has no interest in trying to understand Holly’s side like Kendra spoke of doing.

Kendra has also spoken highly of Hef in the years since their relationship, but Crystal is straight up downplaying the pain Holly went through. She didn’t have the same awful time in that house, but shouldn’t she acknowledge the fact not everyone was grateful for what Hugh Hefner did for them — or to them?

What do YOU think? Whose side are you on? (And would you watch a Girls Next Door reunion special where they hashed this out or WHAT?!?)