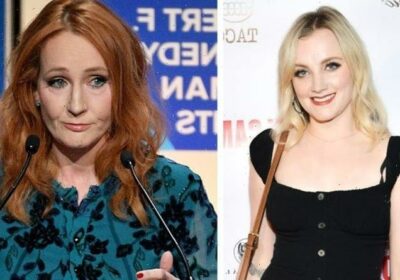 Evanna Lynch has dispelled rumours of a feud between cast members and JK Rowling, insisting that they have nothing but respect for the 56-year-old. The Irish actress recently appeared in the Harry Potter: Return to Hogwarts HBO special to celebrate the 20th anniversary of the franchise’s first instalment.

I think she was busy and she was never on the sets very often. She’s still a big part of it

And while many cast and crew members were invited back to film scenes for the one-off taping, JK was nowhere to be seen.

Instead, she appeared in archived clips taken from previous interviews as fans rushed to social media, under the impression JK had been snubbed from the reunion.

Evanna appeared on GB News on Tuesday to address claims of an alleged rift between the cast and JK, saying that everyone isn’t going to agree with someone else’s opinion on things.

Still, there still seems to be a lot of respect for the Fantastic Beasts and Where to Find Them writer, who helped turn the likes of Daniel Radcliffe, Emma Watson and Rupert Grint into world-renowned movie stars.

“I’ve talked to all the cast, they all have great respect for her even if they don’t agree with her beliefs,” Evanna said.

“I really strongly disagree with the narrative that there’s a rift.”

The actress also brushed off a rumour that JK appeared in archive videos because she wasn’t invited to the gathering.

“I don’t think that was about the conversations that have been had about more controversial issues.”

She added: “I think she was busy and she was never on the sets very often. She’s still a big part of it.’

Evanna, who first starred as Luna Lovegood in 2007’s Harry Potter and the Order of the Phoenix, continued saying that JK’s comments on the transgender community had sparked a difficult debate.

In June 2020, JK caused controversy after criticising an opinionated piece that used the term “people who menstruate” instead of women to include transgender men.

She tweeted; “‘People who menstruate’. I’m sure there used to be a word for those people.

“Someone help me out. Wumben? Wimpund? Woomud?’”

The Ickabog novelist later clarified her stance to the transgender community, explaining that she respects “every trans person’s rights to live any way that feels authentic and comfortable to them”.

Yet Evanna insists that the Yate local is entitled to her own beliefs, regardless of how difficult the conversation has been for some.

“She has her beliefs and she’s doing her thing,” the Madness in the Method actress expressed.

“We all have strong beliefs and it’s been a very difficult conversation.

“I want there to be healing and I don’t want us to keep fighting, so I reject that narrative that there’s been a cold shoulder.”