Home » Celebrities » Harry and Meghan ‘may fly Archie and Lilibet to UK for the Queen’s funeral’, says expert claims

Harry and Meghan ‘may fly Archie and Lilibet to UK for the Queen’s funeral’, says expert claims 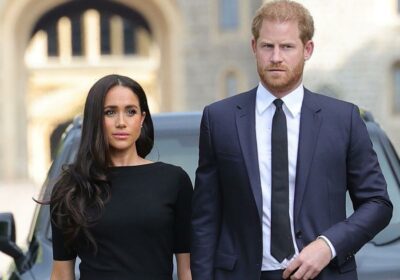 Prince Harry and Meghan Markle could fly their children, Archie, three, and Lilibet, one, to the UK ahead of the late Queen's funeral, an expert has said.

The Sussexes were on an unofficial European tour when the sad news of Elizabeth II's poor health broke on Thursday afternoon. They immediately cancelled the rest of their plans the Duke raced to Balmoral, where other family members were also gathering at Elizabeth II's side.

Following the monarch's sad death, a spokesperson for the couple has since confirmed they will stay in the UK for the period of royal mourning, which finishes seven days after the funeral on September 19.

According to The Telegraph, the Sussexes are trying to work out whether Meghan’s mother Doria Ragland, 66, should fly out with the children, who have spent more than a week apart from their parents.

The Sussexes were doing a whistle-stop tour of Europe for a series of events after landing in the UK. The Queen’s death at Balmoral on 8 September at the age of 96 forced them to extend their stay.

A distraught Prince Harry making a dash to Scotland in a bid to say his goodbyes to his grandmother whom he shared an extremely close bond.

Devastatingly, Harry did not make it to Balmoral until an hour after the Queen's death had been publicly announced.

Despite the drama that has unfolded between the Sussexes and the rest of the royal family, Harry is said to have been the "apple of the Queen's eye".

On Saturday, Harry and his wife joined the new Prince and Princess of Wales for a walkabout outside Windsor Castle, to the surprise of well-wishes who were paying their respects to Queen Elizabeth II.

The group, who Royal fans celebrated reuniting in public for the first time since 2020, spent more than 40 minutes speaking to members of the public, where they received flowers, gifts and hugs.

Cameras picked up Prince Harry sharing a touching moment with royal fans as he confessed to them he now found it very "lonely" without the Queen. He also melted the public's hearts with his displays of "protectiveness" for Meghan.