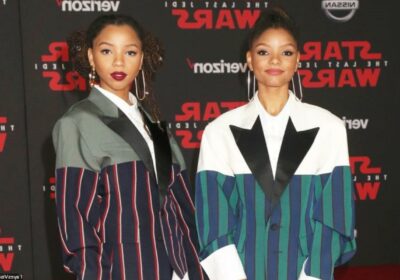 The Ariel of Disney’s upcoming ‘The Little Mermaid’ jumps to her sister’s defense after the elder of the duo Chloe x Halle is mocked for her so-called overhyped looks.

AceShowbiz –Halle Bailey lets everyone know that she’s always got her sister’s back. “The Little Mermaid” star has warned an internet troll after the hater attacked the singer/actress’ elder sister Chloe Bailey over her looks.

Telling Chloe’s fans that the one-half of singing duo Chloe x Halle doesn’t deserve all the love she’s got, the critic said the fans were “overhyping” her looks. “I feel like Chloe Bailey is cute but y’all be overhyping shawty,” so read the person’s hateful comment.

While Chloe coolly responded to the hater by writing back, “agreed,” Halle quickly stepped up to warn the hater. “girl let’s not start be blessed!! God loves you too!!!” she told the critic, before declaring her unconditional support for her elder sister, “i ride for my sister till the enddd okayyyy.”

Halle has since received praises for defending her sister Chloe. “OMG LOVE HER, she doesn’t play when it comes to her sister it’s a born in march 27 thing,” one person reacted to the 21-year-old’s response to the hater.

“HAHAHAHHHAAH she said ‘this is your final warning’, I’m CRYING,” another trolled the hater. Someone else raved, “our good sis back at it,” while another reminded others, “I knew Halle was the protective sister! If you try to hate on her or Chloe, she will respectfully call you out. She got time now. Remember she not in Ariel’s character no more!She’s not the one or the two!”

“And she deserved it lol. Halle don’t play and ppl need to stop tryna mess with Chloe,” a fifth person echoed the sentiment. Another supported Halle, “Period @HalleBailey you better let them know your sister not the one to play with @ChloeBailey is fire she’s gorgeous talented her body is everything don’t do it.”

Another clapped back at the hater, “Ha ha ha she funny… a big hater I see.” One other, meanwhile, also defended Chloe, “@ChloeBailey is beautiful and very talented you don’t like her close your eyes and keep her name out your mouth…”