Sigh. Gucci, this was NOT the start to Black History Month that we needed.

The designer brand is facing backlash, after one of its truly expensive and truly racist sweaters caught people’s attention online. And in 2019, with the state of our society and pop culture as it is, we just have one question: why?

The Italian luxury brand’s “Balaclava knit top” features a super long, cloth neckline that pulls up and over the nose, with an opening for the wearer’s mouth. The mouth opening is outlined with oversized red lips, directly mirroring the images of minstrelsy from the early 20th century.

Gucci has since pulled the item from its physical and online stores, but thanks to a screenshot captured beforehand, you can see it for yourself (below): 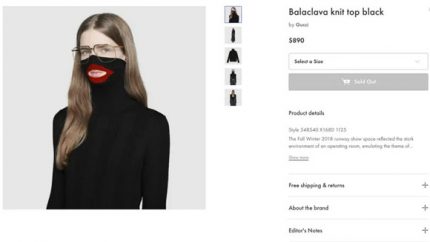 The brand issued an official apology about it via Twitter, saying:

“Gucci deeply apologizes for the offense caused by the wool balaclava jumper. We consider diversity to be a fundamental value to be fully upheld, respected, and at the forefront of every decision we make. We are fully committed to increasing diversity throughout our organization and turning this incident into a powerful learning moment for the Gucci team and beyond.”

Welp. Apology or not, Twitter had quite a lot to say about the whole thing:

Sigh. As we mentioned before, why are things like this still happening?

You would think after that controversial and racist H&M ad debacle at almost the exact same time last year, that other companies would learn from their mistakes and keep racist messaging out of its designs. Were there no people of color at the table when deciding on new looks for sale??

What do YOU guys think about Gucci’s sweater? Sound OFF in the comments below!