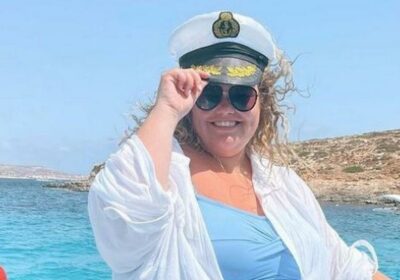 Amy Tapper looks slimmer than ever as she shared a glamorous new post on social media.

The former Gogglebox star posed in a blue swimsuit and white baggy shirt after losing three stone, sharing the picture on Instagram.

Amy, 22, completed the look with a sailors hat and aviator sunglasses. The reality TV star was standing in a boat against an enviable tropical background in the snap.

She captioned the post: "Spending my Saturday night dreaming of being back on this boat."

One person wrote: "hey this is cute." Amy, who starred in the Channel 4 show with her family from 2013 to 2018, was previously told by doctors that she suffers from a slow metabolism but she's now lost an incredible three stone and has lost three dress sizes, going from a 26 to a 20.

She has also lost 33cm off her waist.

She revealed her weight loss happened after cutting down her portion sizes and dancing around her home. Amy told The Sun: "I have been doing quite a lot of dance workouts at home, every day. They’re 25 minutes long on YouTube.

"It is exercising to a beat and gets you going."

Amy said she does the exercises at least every other day, mixing and matching it with yoga.

She said: "I add in squats while brushing my teeth, too. I love squats. Every person’s body is different and everyone’s metabolism is different." Amy continued: "Over the past ten years I think I have come to a conclusion about what is best for me and what works for me. Before, I would lose 2st easily, then my body would just never budge after the 2st.

“It has been an ongoing battle but I think I have finally cracked the code."

Earlier this year, Amy revealed that she had taken part in the Super Slimmer Plan with MuscleFood Goal Getters.