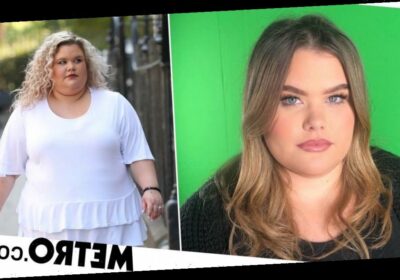 Amy Tapper has opened up about her weight loss, after losing three and a half stone.

The Gogglebox star recently wowed fans with a glamorous snap as she prepared to take part in new series Celebs Go Skating.

She previously explained that she was feeling better than ever, and ‘loves herself as a person more’ after the transformation.

Lifting the lid on what spurred her to make changes, the 20-year-old has now told Metro.co.uk that she has had issues with her weight since she was a child.

‘There was nothing specific because I’ve struggled with my weight since I was about eight-years-old,’ she said. ‘I’ve always tried every diet under the sun, I’ve done everything from shakes to this, to that…

‘All my friends would tell you that they’ve seen me do every single diet under the sun. I think it was just the right time, the right age, my mind was exactly where it needed to be. I was really on it, and still am.

‘Just changing a whole lifestyle rather than doing a really quick fix on shakes and bars that just didn’t… I’d lose two stone and then put it back on the minute I eat an apple.’

Amy has been a staple of our screens since she first appeared on Gogglebox in 2013, aged 13, and remained there for five years.

She went on a ‘gap year’ after her departure the Channel 4 show in 2018, and gave herself the opportunity to ‘let go’ for those months.

The star didn’t think about food and just enjoyed herself, getting her ‘head back in the game’ upon her return.

Discussing the reaction from fans after unveiling her transformation, she admitted it was ‘overwhelming’.

‘My phone literally blew up and all I kept thinking was, “I don’t want them to think this is the end, I’ve still got a long way to go!”,’ the Celebs Go Dating favourite continued.

‘It really was amazing, and it’s my followers that keep me motivated to do it more, because then they follow my journey. I gained so many followers after I posted that, because people want to then see the journey.’

This positivity hasn’t always been the case for Amy – who has grown up in front of the camera.

While taking part on Gogglebox, she was met with trolls on social media – which led to her leaving Twitter.

‘I never go on Twitter anymore but I used to a lot when I was younger,’ she added. ‘I used to type in my name when I was like 14/15, when Gogglebox was at its peak. I used to see some horrible, horrible things.

‘But then I realised that, if you actually just look at the tweets where people have actually mentioned you and tagged you, and not just said your name, they’re the nice ones.

‘Whereas when you type your name in, that’s when you’re going to see the horrible ones. Trolls never really tagged you in it. So I just stopped typing out my name and I ditched Twitter for a bit.’

Celebs Go Skating is available to stream on Inside Trak now.