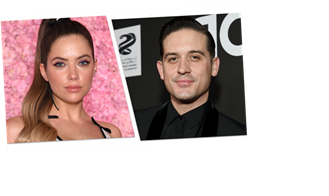 Ashley Benson and G-Eazy have called it quits. The “No Limit” rapper and the former Pretty Little Liars star have decided to go their separate ways less than one year after first getting together.

A source tells ET that the pair have broken up. Romance rumors between the two first sparked in May, after they were photographed showing PDA in Los Angeles.

“G-Eazy really enjoys being in relationships and likes the idea of having a girlfriend, but his relationship with Ashley was becoming a bit too domestic for his liking and that was one of the reasons they broke up,” the source says. “Now that their relationship is over, he’s looking forward to being single.”

It’s unclear exactly when the split occurred, but the source says that G-Eazy is “embracing the single life.”

“He’s also been working on new music and he’s looking forward to this new era both professionally and personally,” the source adds.

After months of romance rumors, Benson took G-Eazy to her sister’s wedding in September. However, it wasn’t until Nov. 2 that they made their relationship Instagram official, when they posted pics of themselves dressed as Batman and Catwoman for Halloween.

ET spoke with G-Eazy in October, where he opened up for the first time about his relationship with Benson. The “Hate the Way” rapper couldn’t help but gush over his then lady love. The two have worked together on several songs.

“She’s an exceptionally talented person  in many different spaces,” G-Eazy told ET of Benson. “She’s a special one.”

“Obviously, she’s a great actress, but, you know, getting to work with her and putting her in front of a microphone and watching her sing so effortlessly, she has this very special tone of voice and texture and something that’s very innate to her given that’s not her first job or what she’s known for,” he continued. “It just blew me away that you can have such a hidden, special talent that the world doesn’t get to see as often.”

See the video below to hear more.