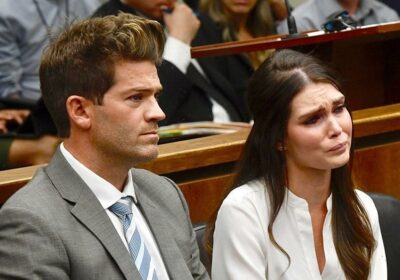 State prosecutors moved on Friday to dismiss several rape charges against Dr. Grant Robicheaux, who starred on an episode of the 2014 Bravo reality show Online Dating Rituals of the American Male.

By dismissing rape charges against them, prosecutors will concentrate on a 2017 sexual assault charge against the two. That case was bolstered by new allegations that drugs were used in that attack.

The case against the two began two years ago, with Robicheaux, 40, and Riley, 33, painted as sexual predators who preyed on vulnerable women. They were accused of drugging women they would meet at various Newport Beach venues and then taking them to their Newport Beach home to sexually assault them.

Robicheaux was charged with sexually assaulting seven women, with Riley charged with five assaults. They have both pleaded not guilty and have denied that anything that happened was not consensual.

Prosecutors asked to dismiss 10 sex crime charges involving six of Robicheaux’s seven accusers. The motion indicated that an independent review indicated that some allegations could not be proved beyond a reasonable doubt.

At the same time, prosecutors asked to dismiss three firearms enhancements against Robicheaux and Riley and to reduce four felony charges of drug possession for sale to misdemeanors.

On Friday, the judge in the case asked the state to file a brief explaining why it plans to dismiss certain charges before he makes a decision.

If the judge decides to grant the prosecutor’s wishes, the state will move its focus to an incident that happened in April 2017. The couple were charged of assault with intent to commit a sexual offense.

In that incident, Robicheaux allegedly began chatting with the woman on a dating app. They agreed to meet in person at a Newport Beach restaurant, with Riley joining them and posing as a friend.

The group later went to a bar, and prosecutors allege the alleged victim’s drinks were drugged. The woman, described as in her 20s, woke up in the couple’s home during the sexual assault. She ran to the bathroom and locked herself inside until the morning.

Prosecutors claim Robicheaux and Riley administered drugs in order to “engage in sexual intercourse with an incapacitated victim.” They also allegedly gave the woman cocaine and PCP.

“The defendants’ actions of facilitating the victim’s excessive consumption of alcohol and drugs to ultimately prevent her from possessing the ability to resist sexual intercourse was the underlying motivation for their behavior,” state prosecutors wrote in their motion.