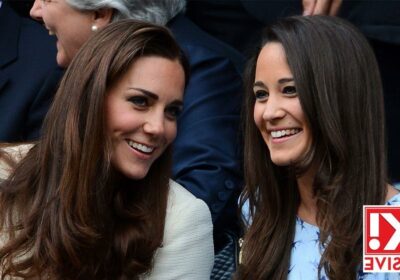 In the video released to mark their 10th wedding anniversary, the Duke and Duchess of Cambridge were seen playing with their children on a windsweptNorfolk beach.

Casually dressed in jeans and a Barbour jacket, Kate helped little Louis climb the steep sand dunes as George and Charlotte ran ahead with Dad.

Then, after a tiring walk, the family returned home and built a fire in their garden so they could toast marshmallows.

Kate was positively glowing with happiness as she helped her children enjoy the simple pleasure – no doubt because it reminded her of her own carefree upbringing, and the life lessons her parents instilled.

Reflecting on her childhood in a recent interview, Kate explained, “What resonates the most is the simple things. I see that now with my own children. Life is so busy and distracting and sometimes simple things, like watching a fire on a really rainy day, provide such enjoyment.

“It totally strips away complications and pressures. I think those experiences mean so much to children and the world they’re in.

“As children, we spent a lot of time outside and it’s something I’m really passionate about. I think it’s so great for physical and mental wellbeing and laying those foundations.”

The down-to-earth duchess has certainly demonstrated that her own foundations are rock solid.

Royal expert Katie Nicholl explains, “Family is at the heart of everything Kate does, it’s what grounds her and anchors her.

“To truly understand Kate, you have to understand the Middletons – because she is a testament to her secure and loving upbringing.

”When she married William she made it very clear that her family were non-negotiable. She would embrace his family but he had to embrace hers too.”

Catherine Elizabeth Middleton was born to Carole and Michael Middleton at the Royal Berkshire Hospital in Reading on 9 January 1982.

Michael, now 72, came from a wealthy Leeds family. His father was an airline pilot and his mother, Valerie Glassborow, a VAD nurse and code breaker during the Second World War.

Carole Goldsmith’s ancestors were coal miners and labourers. Her dad, Ronald, was a painter and decorator, and her mum Dorothy was a shop assistant.

Carole, now 66, grew up in a council flat in Southall, Middlesex, with her younger brother, Gary.

She left school at 16 but later returned, passed four A levels and hoped to become a teacher. But Carole’s parents couldn’t afford to put her through college, so she trained as a secretary before going to work for British Airways as a stewardess.

Her brother, Gary, now a multimillionaire recruitment consultant, has recalled, “We come from very humble stock. We didn’t have much growing up, but Mum passed on a great work ethic. She also taught us that if you want something, you go for it.”

Carole met Michael when he was working as an aircraft dispatcher in the mid 1970s.

They married in June 1980 and moved into a modest, four-bedroom house in Bradfield Southend, Berkshire.

Their second child, Philippa Charlotte, was born in 1983, and the following year the family moved to Amman in Jordan, where Michael worked for almost three years.

Kate attended the Al Saheera nursery and learned to sing Happy Birthday in Arabic before she knew the words in English.

They moved back to the UK in September 1986 and, aged four, Kate was enrolled at St Andrew’s school in Pangbourne.

Her brother, James William, was born in April 1987. That same year, Carole and Michael set up Party Pieces, a company making and selling party bags.

It became so successful that by 1995 the family had moved into a Tudor-style manor house in Bucklebury, Berks.

They later bought a flat in Chelsea, owned a racehorse and sent all three children to private schools.

Speaking to podcaster Giovanna Fletcher in February 2020, Kate explained, “I had a very happy childhood. It was great fun and I’m very lucky that I come from a very strong family.

“My parents were hugely dedicated. I really appreciate now as a parent how much they sacrificed for us.

“They came to every sports match, they’d be the ones on the sideline shouting, and we’d always have our family holidays together.”

Those holidays were always active and outdoorsy – sailing in Norfolk or hiking in the Lake District (where they rented a cottage with no electricity or running water), or skiing in the French Alps.

At home they ate dinner together every weeknight, with the kids helping to set and clear the table.

One of Kate’s fondest childhood memories is of “the amazing white rabbit marshmallow cake Mummy made when I was seven”.

Now she bakes birthday cakes for her own children, often staying up late at night in a messy kitchen to get them finished.

Kate loved dressing up as a clown in giant dungarees and playing musical statues, but she was always happiest running around outdoors.

When Pippa joined Kate at St Andrew’s school they were soon showing their sporting prowess, excelling at hockey and tennis.

Kevin Allford, who taught Kate French and German, says she was a “hard worker and very conscientious”.

He adds, “Obviously, she was the same in sport. She was a tremendous athlete and swimmer. I used to be in charge of swimming and she was very, very good, as her sister was.”

In 1990, the sisters both joined the local Brownies group, going on field trips, learning crafts and earning as many badges as possible.

“Catherine was quite easygoing,” her pack leader June Scutter reveals. ”They were just ordinary children – nothing different from any others.”

Kate began to show an interest in acting. At 11 she played Eliza Doolittle in the school’s production of My Fair Lady and, aged 13, starred in the Victorian melodrama Murder In The Red Barn.

But within weeks she was being bullied by other girls. Former classmate Jessica Hay claims she was picked on “because she was perfect – well turned out and lovely” and the stress caused Kate’s eczema to flare up.

Her parents decided to move her to the exclusive co-ed boarding school, Marlborough College in Wiltshire. Fellow pupils remember a sad, shy new girl arriving halfway through the academic year.

One, Gemma Williamson, recalls, “Apparently she had been bullied very badly and she certainly looked thin and pale. She had very little confidence.”

Kate’s house tutor, Joan Gall, says, “When she arrived she was very quiet. Coming into a big school like Marlborough was difficult, but she settled in quickly. She got involved in school life and loved sport and music.

“It was like a big, happy family. We would do things like bake cakes and watch videos.”

After prep, Kate would hang out in the common room eating her favourite snack – microwaved Marmite sandwiches – while listening to her Sony Walkman or watching TV.

Hit series Friends was a favourite and at their end-of-term party, or “House Shout”, she sang the theme tune with classmates.

As she relaxed, Kate formed close friendships and proved to be one of the most popular girls in the school.

Kathryn Solari, who was in her biology set, says, “Catherine was always really sweet and lovely. She treated everybody alike. “

Kate became joint captain of the tennis team and shone in high jump and netball, too.

Pippa and James both followed her to Marlborough. They were in school plays together and all attended summer drama camp.

After her GCSEs, Kate went on a school hockey trip to Argentina, then to the Caribbean with her family.

School friend Gemma says, “Kate came back after the long summer break an absolute beauty. Every boy in the school fancied her rotten.”

Denise Allford agrees, “Pippa was still a tomboy but Kate had lost her braces and looked stunning. She was wearing make-up and looked amazing.”

She also had a brief romance with rugby team captain Harry Blakelock.

In the sixth form, Kate was a prefect and head of house and “not much of a party animal”. Instead, she swotted for her A levels in chemistry, biology and art and, in 2000, her hard work paid off when she gained two As and a B.

But by the time she left Marlborough to set off on her gap year, Kate had truly made her mark. And in the school yearbook, Catherine Elizabeth Middleton was voted “person most likely to be loved by everybody”.

“It was not a Cinderella story,” he says. “Kate, Pippa and James had a privileged life, but Carole did a great job in making sure they never took it for granted. She knew her roots.

“It’s no surprise that when I first met William he was making a cup of tea in Carole’s house. He just said, ‘Hi, I’m William.’

“I can guarantee that even now when he is there, he will be given roles, because that’s how Carole is. Everyone gets a job. He’ll be on emptying-the-dishwasher duty like everyone else.”

For all the latest news on the Royal Family and much more, sign up to OK!'s new Royals newsletter here.