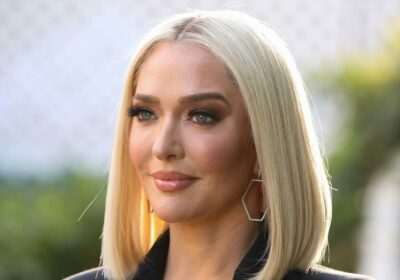 Welp, The Real Housewives of Beverly Hills’ reunion was last night and uh…there’s a lot for all of us to discuss with our friends, family, and therapists! Much of this season has obviously focused on Erika Jayne and her legal woes, and Andy Cohen put her in the ~hot seat~ during the reunion, even asking about calls for her to be fired from RHOBH.

“Why should I be fired?” she asked, per Just Jared. “Why are you presuming that I’ve done something? Why aren’t we letting the legal process play out? You’ve heard one side—and a lot of bullshit on that side. Give me a chance to defend myself. Watch me. I’m ready for the challenge. Watch me do it.”

Erika also confirmed that the show is a major source of income for her, and said her lawyers told her she should quit. “And then I said, ‘No, because I have nothing to hide.’ And they said, ‘Well, you know that this shit can get flipped around on you.’ Everything can be parsed, twisted, turned and yes, possibly turned against you. Whether it is true or not, it almost doesn’t even matter at this point. But I’m not a quitter and I wanted to honor my commitment. I wasn’t going to run away from what’s coming at me.”

Erika’s RHOBH salary was revealed by the New York Times to be a reported $600,000 for season 11, and Us Weekly reports that it will doubtlessly increase if she continues for another season. A source told the outlet, “It’s going to be much more next season,” adding that Erika has been the “sole focus this season” and after being “put through the wringer and following producers’ orders,” there is “no question” she will “demand a higher paycheck.”