England legend Kelly Smith says motherhood has changed her life and invites OK! into her home 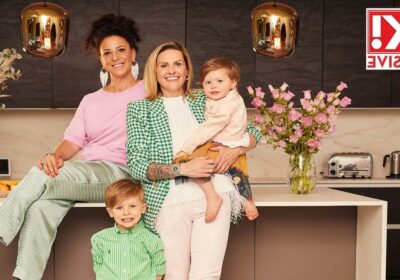 Kelly Smith has been named alongside Pele, Diego Maradona and Lionel Messi as a footballing great, but the former England women’s skipper remains as humble as she was the first time she kicked a ball. She’s one of the most accomplished players around with four titles in the Premier League, three in the FA Cup and one in the Champions League, plus 117 caps for the Lionesses – that’s two more caps than David Beckham earned with the Lions.

Yet the down-to-earth icon shuns the showbiz lifestyle in favour of domestic bliss with American wife DeAnna Dobosz and their children Rocco, four, and Lucia, two.

Welcoming us into their North London home, Kelly, who had the majority of her success as skipper of the Arsenal ladies’ team and was awarded an MBE for services to the beautiful game in 2008, admits she never played for fame and fortune.

“I was put on this planet at a time to help raise the profile of the women’s game and I hope I did that,” says the modest 42-year-old. “I’m not bitter or sulky that male players are celebrated more.”

Having retired from international duty in 2015 and Arsenal in 2016, Kelly now focuses on raising her kids, who were born via IVF donor, alongside DeAnna, who works in mergers and acquisitions.

Just a week before our exclusive interview, the couple celebrated their five-year wedding anniversary and it’s clear they’re deeply in love. When Kelly walks in wearing a stunning red dress, styled especially for the shoot, DeAnna gasps, “You look amazing!” as her wife blushes. "I have no filter,” DeAnna laughs. “I can’t help but compliment her, she’s so gorgeous!”

Here, the couple tells us all about life after football….

Thank you for having us! How did you meet?

DeAnna: It was love at first sight for Kelly. She was straight on the phone to her friend saying she’d met someone.

Kelly: It was for you too. DeAnna was living in Edinburgh and I was in Watford, and so we commuted for the first six months to a year.

DeAnna: Then I moved down to London, where we renovated a property.

And then came marriage…

Kelly: Yes, we got married five years ago in Hampstead Heath, at the pergola garden, with our two best friends. It was just the four of us.

DeAnna: We wanted a small, intimate ceremony. Then we got the Eurostar to Paris, where the Euros were kicking off. The first day of our marriage we were in Paris with all these fans, watching the football on the big screens. It was unbelievable.

Are you a big footie fan too, DeAnna?

DeAnna: I am now! But when I met Kelly I had no idea who she was – she told me she was a PE teacher! I didn’t know anything about women’s football. I did not know such a job existed.

Kelly, why didn’t you say straight away?

Kelly: At the time, I’d broken my leg and I’d gone away to clear my head and recover – I didn’t want to talk about football at all.

DeAnna: Plus, you wanted me to like you for who you were, not what you did. But a few days later someone told me Kelly was an England and Arsenal footballer. I was like, “What!? She said she was a teacher!” So the first few days I knew her as Kelly Smith the PE teacher.

Kelly: I came clean eventually. [Laughs] And then we were engaged within six months.

DeAnna: We married three years later and Rocco arrived in 2017.

Were kids always on the cards?

DeAnna: From day one!

Kelly: I knew immediately I wanted children with her. And you felt the same, didn’t you? We knew we were meant for each other.

DeAnna : Even though personality-wise we’re quite different, we knew we were made for each other.

Who takes which role in the family?

DeAnna : Kelly’s the caretaker, she looks after the children and makes sure we have the staples in the house, and I provide the entertainment and I’m quite bossy. But we’re a good balance. We’ve learnt to work together. In the pandemic, I was working really hard from home. So Kelly, in the whole first lockdown, had both kids in the house on her own. We had to find a rhythm in that. And it was hard.

Did that lead to conflict?

Kelly: Occasionally. But I think we communicate well. If things aren’t going well, we’re pretty open and honest about it. Even if we do get into a fight, we never go to bed angry. We get things resolved, once we calm down.

DeAnna: Kelly’s taught me a lot about not worrying about the little things. And she’s learnt to take more control as well. In football, they’re told everything. What to eat, where to be, when to sleep. It’s hard when you come out of it to readjust to normality.

That surprises us, seeing as you were a team captain?

Kelly: I was always confident on the pitch, it was my environment. I take charge, I’m a winner. I lead by example. People valued what
I was saying. But off the pitch, I’m reserved and shy. I find it difficult to have conversations at times. I don’t think I’m very interesting! When I started doing TV stuff, I had to really push myself to do that. I guess I don’t believe I’m good unless it comes to football.

So how did motherhood change that for you?

Kelly: I had to try to come out of myself for the kids – learn how to email the school, set up playdates, that sort of thing.

DeAnna, were you always more of a natural parent?

DeAnna: I actually never wanted kids. I’m 49 now but the minute I met Kelly, I wanted them. I didn’t want to carry but I wanted Kelly to carry my embryo. However, we were told the age difference was too much. So Lucia and Rocco are from the same [sperm] donor and Kelly carried both. They both look like her.

Has it been an issue between you?

Kelly: A couple of times you’d get upset, wouldn’t you? Thinking they won’t look like you. But they have so much of your personality. And that’s a huge part of their lives.

DeAnna: Everything Kelly brings into the world is super-lovely.

How will you talk to the kids about raising them as a same-sex couple?

DeAnna : We’re reading them books about how all families are different. Some kids have two dads, some have two mums. A lot of our friends are two mummies as well.

Kelly: I don’t know how many same-sex couples there are in Rocco’s nursery though…

DeAnna: Kelly’s worried they’ll get bullied. But I’m confident if we give them the confidence and education, they’ll be fine. They’re surrounded by so many different, diverse people. Rocco understands. When he’s older, if he’s interested in exploring his biological father, we’ll make that work.

Would you have more kids?

Kelly: We have one embryo left. If we were younger when we met and started the IVF journey, we’d have had another one. But raising them in lockdown has been tough and it’s made us realise we’re good. We have one of each, so it’s perfect.

Kelly, you’ve been open about going to rehab for an alcohol problem in the past. Has having a family put those demons to rest?

Kelly : Yeah, definitely. Having the kids has really grounded me and that’s my main focus now. For 25 years, football was my sole purpose. I had so much ambition. But since stepping away a bit, I’m fully focused on being a mum.

DeAnna: Kelly didn’t want to retire until she got pregnant, so she had something to focus on after football.

Well, a lot of footballers struggle after retirement. They feel lost…

Kelly : Exactly. You lose yourself in the game, in a sense, when it’s all you’ve known. And getting pregnant was the focus I needed.

Could you tell us a bit about your rehab stay?

Kelly: I was drinking way too much when I was playing in the States. I was recovering from a serious knee injury that kept me off the pitch, and in that time, when football was taken away from me, I lost myself. I didn’t know who I was. I would use alcohol on a daily basis and drink until I passed out. I got myself better, got back on the pitch, but then another injury forced me out for another nine months. And so the cycle started up again. I was trying to hide it from my parents but my dad knew. He flew out to New Jersey, took me home and I went to rehab.

Have you stayed off alcohol?

Kelly: I still drink now and then but I never go crazy.

You’ve been likened to the greatest male players…

Kelly: It’s very humbling. I was always just Kelly Smith from Watford. I love playing. I felt so free and I knew I had a God-given talent, and I loved every minute on that pitch. But I had to work at it. All the hours in my youth, playing in the parks, it all helped me.

Did you ever feel any resentment that male players earned more?

Kelly: It was just the era I was born in. I don’t feel upset or sulky, I was put on this planet at a time to help raise the profile of the women’s game, and I hope I did that. You can’t be bitter. The women’s game is still on the up.

Was it ever an issue for you, coming out as a footballer?

DeAnna: You didn’t come out until after you’d retired, did you?

Kelly: Teammates of mine knew and I was comfortable with it, but I just never acknowledged it publicly. Homophobia isn’t something I’ve personally experienced in the game, I just wanted to stay private. But when I met DeAnna I knew she was the one, so I just relaxed. It was like a big sigh of relief – I didn’t care what anyone thought. I suddenly felt really comfortable in speaking about it and I’ve never looked back.

DeAnna: Whereas I busted out of the closet when I was a teenager!

Finally, will you be back on the pitch with Mark Wright and co for Soccer Aid in September?

Kelly: I will! I’m excited. It’s a lot of fun and people like Olly Murs and Mark are always up for it. They want to win, a bit like me!

To support Soccer Aid or buy tickets to this year's event, visit socceraid.org.uk