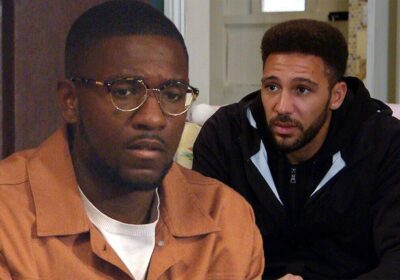 Emmerdale star Emile John has admitted that he “found it difficult to be at the heart” of the soap’s “controversial” storyline about racism. Emile, who plays lawyer Ethan Anderson, told Express.co.uk and other publications that Emmerdale was “brave” for including such “abhorrent” examples of racism on the show.

Emile, 25, is in the midst of an ongoing storyline that sees his character Ethan wrestle with his conscience after agreeing to represent the racist Jordan Greenlow (Jack Parr).

This is Ethan’s first case as a duty solicitor, but his role in representing the accused has caused tensions in the village.

Asked what his first reaction was when he saw the script for the complex story arc with racism as its core, Emile spoke about how “abhorrent” he found the language to be.

“Just looking at the scripts and stuff and also the language is just such, you know, abhorrent language that the viewers will see,” he explained.

“So, being at the heart of that was quite difficult sometimes.

“But yeah, it’s fun to play and I’m having a lot of fun with it,” Emile reflected.

Speaking about the importance of Emmerdale featuring such a hard-hitting storyline, the actor went on to praise the soap for not shying away from the issue.

“I think it’s important,” he said. “I think this storyline speaks to Ethan’s character and you know who he is as a person. We really get to see what Ethan’s values are here.

“And also, I think it’s important to show that these people like Jordan do exist in the world.

“Emmerdale are being brave in that they’re choosing to call out this behaviour.

“I think that the viewers will find more of a connection to Ethan and understand his psychology more,” he explained.

“And, just with the storyline as well, it’s quite a controversial one.”

Emile went on to speak about the difference between covert and overt racism and how the issue is often portrayed on television.

The actor shared: “I think this storyline brings to light what can actually happen and what does happen in the world.

“I think Emmerdale has been really brave and they’re sort of showing it in its most huge form.

“Like, usually when series or dramas talk on the topic of racism it is more covert racism, and it’s not really too harsh.

“But here we see someone who is actually very overt with it. His language is disgusting.

“And yeah, it’s important because these people in the world do exist.”