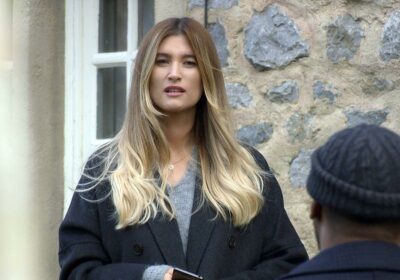 Charley Webb confirmed on Instagram Monday 3 January that she has indeed left Emmerdale after 19 years on the soap.

The 33 year old finally addressed the rumours that she had quit the long-running ITV series as she answered a question from a fan during a Q&A session she participated in on Instagram Stories.

Posting a photo of herself with husband and fellow Emmerdale star, Matthew Wolfenden, and their three children Buster, 10, Bowie, six, and Ace, two, Charley explained her decision behind leaving Emmerdale.

“This is always my most asked question but I’ve never answered it before because I’ve never wanted to make a big deal of it,” she captioned.

“I left to have Ace 2 years ago. I went back at the end of last year for 10 weeks to complete a storyline. So, I guess officially it’s been a year.

"I never felt the need to announce it which is why we didn’t.”

It had been reported that Charley had decided to exit the soap for good following her husband Matthew’s alleged involvement in a race probe on set which saw him suspended for a few weeks.

“Charley is closing the door on Emmerdale for good and won’t be going back," a source toldThe Sun.

“The past few months have given her time to think about the future and it is one that doesn’t involve Emmerdale.

"Matthew being caught up in the row on set fuelled her decision to step away."

Although Matthew has since returned to his role as David Metcalfe on the ITV soap, there are “no plans” to bring back Charley's character, a spokesperson for Emmerdale confirmed to The Sun.

Appearing as a young teenager when she first joined the cast as Debbie Dingle back in 2002, Charley now appears more than ready to move on and enjoy her time playing the role of mum to her three boys.

Posting a photo of her family of five on Sunday, the TV star shared her outlook on the New Year with her 548,000 followers.

“The reality of trying to get a picture of all 5 of us looking at the camera. I’m excited for 2022 with my gang,” Charley captioned.

After confirming her exit from Emmerdale, one fan asked whether or not the actress would fill up her free time by setting up an acting school in the future, to which Charley responded:

“It’s always something I’ve thought about but I’ve never quite got around to making it happen. Maybe I will one day.”