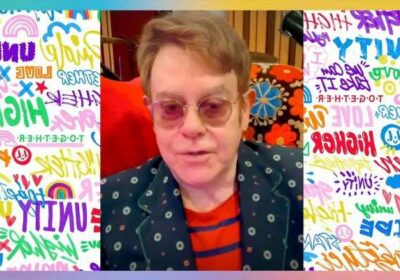 The legendary musician congratulated the 18-year-old YouTube sensation, who came out as a member of the LGBTQ community in January, for “sharing herself with the world” at the end of the “Can’t Cancel Pride” virtual benefit hosted by iHeartRadio and P&G.

“I’m overjoyed that you have joined our beautiful community,” John, who is openly gay, said. “You are able to do something that took people of my generation decades to do.”

The second annual relief benefit was aimed at creating visibility and raising money for LGBTQ issues. Siwa performed her 2016 song “Boomerang,” but before she took the stage the “Rocketman” singer shared his shoutout.

“Not only are you living your truth, you’re a shining example to young people the world over and their families by showing that love is love and people are people and that is that,” he added.

In a January interview with People, Siwa said she “never wanted (my coming out) to be a big deal,” especially to her young fan base.

“I’ve known since I was little,” she said, adding she had “a lot that could have gone away because of my love life.” Siwa said she was met with criticism and negativity by some of her followers when she initially came out.

‘I’ve been the happiest I have ever been’: JoJo Siwa shares photos with girlfriend

Siwa made her relationship with her girlfriend, Kylie Prew, Instagram official a month after coming out. She posted a series of photos of the two together and wrote, “I’ve been the happiest I have ever been!”

She described her girlfriend, who was tagged in the post, as “the most loving, supportive, happiest, protective, and just the most beautiful perfect person in the world.”

Fellow celebrities and internet stars took to the comment section to cheer the couple on.

Internet personality Doug The Pug wrote, “The best of humans!!! So happy for u!!”

Choreographer Mark Meismer wrote, “YES so happy for you both.”