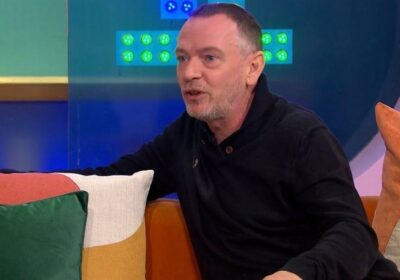 EastEnders legend Adam Woodyatt has been spotted hard at work on a food stall as he continues to take a break from the BBC soap.

The actor, who has just bagged a new presenter role, is currently on a hiatus from the soap after 36 years of playing Ian Beale. It's unknown when or if the star will return and reprise his role as Walford's busybody.

Adam could be seen wearing blue latex gloves while taking orders and serving food at Pub in the Park, a food festival in Wimbledon.

He was serving at The Star Inn’s stall, selling a variety of food including fish goujon tacos and KFP – Kentucky Fried Pheasant.

This isn’t the first time Adam has been spotted at the festival, previously stepping in to serve customers last September.

Adam left EastEnders in 2021 after 36 years of playing Ian Beale, and recently revealed a friend had offered him a job at his restaurant.

He told the Daily Star: "My friend Daniel Clifford has previously offered me a bit of time working in his kitchen at Midsummer House restaurant in Cambridge, so I might go and do that for a couple of weeks.

“Knowing Daniel, he will have me doing the washing up!”

He added: “I met him a few years ago at Pub in the Park and we struck up a friendship because we both like Star Wars.”

Since leaving EastEnders, Adam has appeared on stage and has now landed a new role on TV as the host of brand new BBC daytime series, B&B By The Sea.

The show, which is set in a guest house on the Northern Irish coastline, invites celebrities to go along and create a dish, only using local ingredients.

Other stars already signed up for the show include the likes of Dragon Den star Deborah Meaden, actor Richard Blackwood, and former British athlete Linford Christie.

The move has cast doubt on his character’s return to Walford in the near future.

Appearing on Steph’s Packed Lunch last year before his stint on I’m A Celebrity… Get Me Out Of Here!, Adam announced he was leaving EastEnders with “no plans” to go back anytime soon.

He said: "I’ve kind of left, but not left. It’s kind of the way the storyline has gone, I’m not there. I could go back and I could not go back! I don’t know.

"The speculation has been hysterical. I think everyone is always going to speculate. But there are no plans at the moment."

For the latest showbiz reports and breaking news, sign up to OK!'s daily newsletter here.