Duane Chapman's Daughter Says She Wasn't Invited to His Wedding 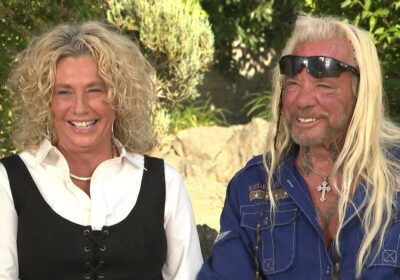 Bonnie Chapman is leveling serious claims against her father, Duane “Dog the Bounty Hunter” Chapman. The 22-year-old daughter of Dog and late wife Beth Chapman shared a lengthy post to Facebook on Tuesday, claiming she wasn’t invited to his upcoming wedding because of her work with social justice groups and support of BLM, among other alleged reasons.

Bonnie and her 28-year-old half-sister, Cecily, first revealed that they’d not been invited to Dog’s upcoming wedding to Francie Frane in an interview with TMZ published on Sunday. Bonnie claimed in her post on Tuesday that Francie had texted her and “confirmed that the reason I wasn’t invited” was because of her work on the UnleashedTV series The System, a docuseries focused on social justice and racial inequality in the legal system.

Bonnie also claimed that the feud stemmed from her decision to “not condemn the streaming platform when they fired my father for using epithets.”

“I’m sorry, but I can’t defend my Dad’s racism,” Bonnie wrote. “When it comes to The System on Unleashed TV, my father was fired by the platform for using racial and homophobic epithets toward my fellow cast members on the show… I have expressed time and time again my ever-growing disappointment in my father’s progression into his old racist ways.”

The statement claimed that Bonnie and Dog’s stepdaughter, Cecily — who is Beth’s daughter with her first husband, Keith Barmore — have been “groomed” by unnamed people who are looking to get “revenge at any cost” against Dog.

“Please pray for Bonnie and Cecily to be released from whatever hold these people have on them. We love them and pray for them every day,” the statement read. “We are grateful to the rest of our family for helping us to set the record straight. Despite the sadness we feel at this rift in our family, Francie and I are looking forward to celebrating our wedding next week with the rest of our family and close friends.”

In her statement, Bonnie went on to claim that, throughout his marriage to Beth, the reality TV bounty hunter “would cheat on my mom all the time,” and that Beth worked hard to “make him the best man he could be. All too often, that job consisted of dealing with his near-constant infidelity with her friends and strangers while trying to teach him to be a better man. I don’t think that work was in vain; I think mom did change my dad. But that change vanished when my mom died.”

Bonnie further claimed that her father “has embraced old prejudices and doubled down on racist and homophobic stereotypes. For example, my dad hates BLM and called BLM protestors who I proudly stand with each and every day ‘thugs.’ He has used horrific epithets against LGBTQ people, and he has further aligned himself with right-wing extremists who believe in QAnon theories.”

Bonnie concluded by stating her decision to speak out was motivated by a desire to protect and defend her late mother’s legacy.

“If my dad and his new wife want to travel to right-wing churches attacking gay people and advancing QAnon theories, he can certainly do that, but I’m going to stand by the memory and legacy of my mom, Beth Chapman,” Bonnie wrote. “Her memory, and the values she stood for, are worth fighting to advance.”

According to a TMZ report, the alleged text Francie sent Bonnie claimed that the rift was due to Bonnie’s continued work with the streaming platform that fired Dog. The alleged text, published in the report, read in part, “Let’s not beat around the bush, You & Cecily both know You haven’t been invited to the wedding because your (sic) living under the same roof with people who stabbed (him), robbed, lied, manipulated, smeared his name and tried to ruin his career.”

“You and Cecily have chosen to align yourselves with this and my job is to AT ALL COSTS protect your dad!!!” the purported text continued.

Dog, who has been married five times thus far and is father to a total of 12 children, got engaged to Francie in May 2020 — 10 months after Beth’s death at age 51 following a battle with throat cancer.

Speaking with ET in September 2020, Dog and Francie opened up about meeting each other after Beth’s death. Francie explained how she had lost her own husband to cancer just months before and the pair bonded over their loss.

“We understood the pain that the other one was feeling and [in] those tough days and moments, we helped each other stand up,” Francie told ET. “We could cry with each other and talk about what we were feeling. We were able to walk alongside each other through the pain and heartbreak and it brought us together in this amazing way.”

Dog also said that there “couldn’t have been a better pick that God picked” for him when he found Francie.

The 68-year-old reality star made a guest appearance on the Two Guys From Hollywood podcast earlier this month and revealed that the pair would be tying the knot on Sept. 2.