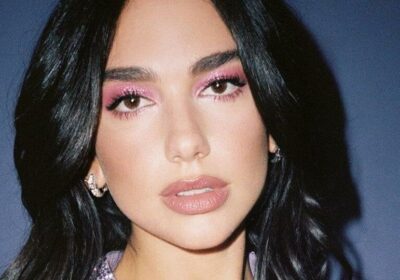 It's a little bit goth, it's very much over-the-top, and the viral boudoir staple is all over TikTok. Users on the app are obsessed with a feather-trimmed, Old Hollywood-style robe and Dua Lipa one-upped the trend by posing in an extravagant Versace version of TikTok's "murder robe."

In her latest Instagram post, Lipa showed off in an inky black silky robe trimmed with fur cuffs and bedazzled with a signature Versace Medusa logo on the back. While it's a much more luxe version of the TikTok staple (users are snagging versions from Amazon), Lipa's black loungewear has the same energy, which TikTokers are describing as "rich divorcée at her third husband's funeral." Add a touch of Morticia Addams camp and a dash of goth and Lipa's made the trend all her own.

"Buongiorno," she captioned her gallery, which shows the robe from various angles alongside an extravagant bouquet and even includes a take on the classic '00s mirror selfie.

The whole attitude aligns perfectly with TikTok's obsession with the robe, which miraculously makes its wearers feel like murderous divorcées, silver screen sirens, and burlesque bombshells, even if their Amazon buys aren't from the house of Versace.

Lipa appeared in Versace's Medusa bag campaign back in February, Vogue notes, and she's declared herself "a Versace girl" on Instagram. She's been true to that spirit, wearing Donatella Versace's designs to this year's Grammy Awards both during her performance and on the red carpet.