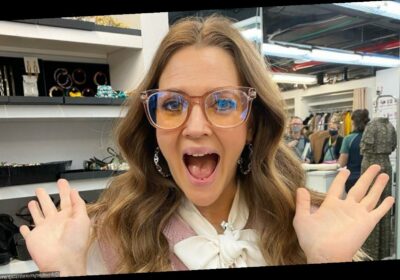 The ‘Santa Clarita Diet’ actress ditches any footwear and only wears a gray T-shirt and sweatpants with no jacket on while hitting the 37-degree streets of NYC.

AceShowbiz –Drew Barrymore has proven how fit she is. The actress appeared to have no problem going out in the chilling temperature as she has been photographed walking around barefoot in New York City.

The 46-year-old star ditched any kind of footwear, not even a pair of socks, while hitting the 37-degree streets of NYC on Monday, March 15. She also had a thin layer of outfit, only wearing a gray T-shirt with matching “Free City” sweatpants, without putting on a jacket.

Drew, however, still wore a face mask for protection amid the COVID-19 pandemic while she appeared to be going makeup free. She also had a black backpack slung over her shoulder, while she stayed dehydrated by carrying a bottle of Just Water.

By comparison, another pedestrian who was captured along with Drew in a picture obtained by Page Six was seen bundling up in a white padded jacket and blue jeans. The woman, who walked slightly ahead of the actress, also wore black boots to keep herself warm.

It’s unclear why Drew opted to go barefoot during the outing that day, but it might be influenced by her workout routine with her longtime trainer Marnie Alton. Marnie recently talked to Women’s Health about her training sessions with the “Santa Clarita Diet” star and praised the star’s determination to stay in shape. “The girl works hard; I’ll give her that,” the personal trainer said. “She blows my mind. She’s got the spirit and energy that you would imagine she would.”

“One of the things that I focus on a lot is not ‘getting through the exercise;’ it’s about feeling what it felt like,” she shared about her method, adding that her workouts with Drew include lots of plie squats. She went on explaining, “We basically work barefoot and that’s because the foot is the beginning of what’s called the kinetic chain in your body.”