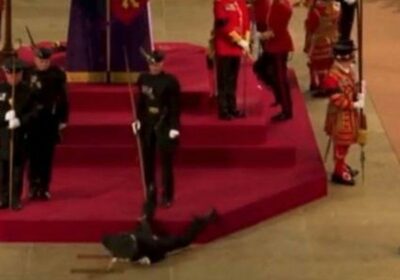 A Royal guard caused a small commotion in the early hours of Thursday morning as he fainted while guarding The Queen’s coffin and toppled face first from the podium.

The unfortunate event happened at around 1am, just as the guard was about to change over, with one soldier dressed in black appearing to be a little unsteady on his feet ahead of the incident.

Stepping off the podium momentarily, he regained his composure and resumed position, but just a few moments later, the same guard sadly fainted and fell from the podium headfirst into the ground.

Immediately two police officers rushed to his aid to pick him up, but the live broadcast suddenly cut out, and went to images of the Houses of Parliament to allow him some privacy during the medical incident.

Several viewers on social media who had witnessed the incident as it was broadcast shared their well wishes with the young soldier.

One user wrote: "He must've been so overwhelmed with what was happening."

Another said: "Bless him – just happened to tune in; saw he was a bit wobbly and feared he'd faint. Hope he's ok.”

Similar comments included: "Poor man, I hope he's alright. It was awful to see" and "It's such a massive responsibility during such a historical moment. I hope he's fine.”

Soldiers dressed in ceremonial uniform are maintaining a constant 24 hour vigil around the Queen’s coffin while she is lying in state at Westminster Hall until her funeral on Monday.

While the soldiers themselves do rotate every 20 minutes, they are still required to stand completely still for around 6 hours at a time, something that has been known to lead to fainting in the past.

The guards from units which include the Sovereign’s Bodyguard, the Household Division or Yeoman Warders of the Tower of London are required to remain completely still at the four corners of the catafalque while on duty.

It comes after a procession lead the Queen’s coffin through central London on Wednesday, as it departed Buckingham Palace for the final time to travel to Westminster Palace, where it will remain until Monday.

Following the coffin, which was draped in the royal standard, King Charles, Prince Andrew, Prince Edward, Princess Anne, Prince Harry and Prince William followed behind on foot as the gun carriage conveying the late queen departed at 2:22pm precisely.

They then arrived at 3pm, where a small service took place, before the Queen was ready to accept visiting mourners, including some who had queued for three days.