Home » Celebrities » Donald Trump: My Buddies Will NOT Be Going to Jail! Pardons For Everyone! 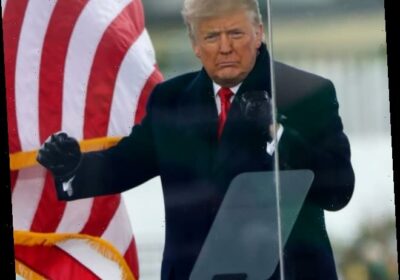 Well, it’s taken us a long time to get here but believe it or not, we’re in the final 48 hours of Donald Trump’s presidency.

While we’re sure the topic is taboo in the Oval Office, Joe Biden will be sworn into the highest office in the land at noon on Wednesday.

Old Donnie might have to hang around D.C. for his second impeachment trial, but after much kicking and screaming, he’ll no longer be a resident of 1600 Pennsylvania Avenue.

Of course, before he leaves, he has some unfinished business to take care of.

You see, despite being a completely repugnant human, the president still has quite a few friends.

And because he’s such a greasy swamp monster, his closest acquaintances these days are mostly opportunistic grifters and thieves who didn’t realize the time to cut ties with Trump was several weeks ago, before he really lost his mind.

Many of these fellow slimeballs are in trouble with the law, and it seems the president is planning to use final two days in office to ensure that none of them suffer any sort of consequences for their crimes.

According to a new report from CNN, Trump is planning to issue 100 pardons this week.

The recipients of this final act of clemency are described by the news outlet as “white collar criminals [and] high-profile rappers.”

So we guess Lil Wayne wasn’t the only hip hop artist to betray his fan base by hopping abourd the Trump Train!

Anyway, Trump was pardoning his buddies like a mad man in the weeks leading up to the holidays.

He took a pause, however, when a bunch of his supporters stormed the Capitol Building with the goal of either assassinating or terrifying members of Congress.

Even the Donald knows it’s not a good look to have one branch of your crime family committing acts of terrorism in your name while you spring a different branch from prison.

But now, the clock is ticking, and Trump is ready to undermine the core principles of this nation’s justice system one last time.

So in addition to the question of will there be another round of violence from domestic terrorists on Inauguration Day, were also left with the myster of who will receive Trump’s final “get out of jail” free cards.

Will the president pardon Joe Exotic, as he once teased in a campaign speech?

Our guess would be no, but onle because Trump probablu has a bias against people named Joe these days.

Will Trump pardon himself and his children?

Normally, it’s the sort of thing he would go in for, if only because it would consitute one final middle finger to the Democrats and the political mainstream.

But it seems that in the wake of the Capitol riots and his second impeachment, advisors have cautioned Trump against self-pardoning, as it might make the president “look guilty.”

Presumably, this was said with a straight face, as though Trump hasn’t spent the past four years making himself look guilty.

Even diehard boot-lickers like Lindsey Graham agree that it would look really, really bad if the president were to let himself off the hook at this point.

“There are a lot of people urging the President to pardon the folks,” Graham said Sunday on Fox News.

“To seek a pardon of these people would be wrong.”

Besides, Trump has the future of his family to think about.

Sure, he might be barred from ever seeking elected office again, but he might deny the world the sh-tshow of an Ivanka presidency.

And like Pinky and the Brain before him, Donald John Trump is nothing without his nefarious, ill-conceived plans to take over the world.