‘Did they pledge this from Clooney’s jet?’ Piers Morgan mocks Meghan and Harry’s CO2 vow 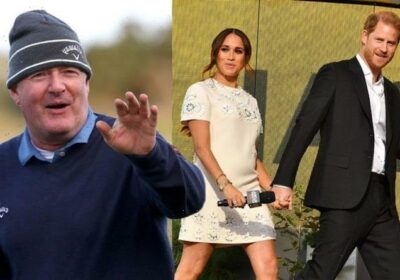 Meghan and Harry: Piers Morgan discusses couple on GMB in 2019

Piers Morgan, 56, has sarcastically responded to Meghan Markle, 40, and Prince Harry’s, 37, pledge to “reach net-zero carbon emissions by 2030” on Twitter today. The former Good Morning Britain host made reference to the Sussex couple’s extensively documented use of private jets, as he asked if the former royal duo were on “Sir Elton or Clooney’s jet” when they made their ambitious promise.

Piers shared a news article reporting on Meghan and Prince Harry’s pledge for their charity brand Archewell to “reach net-zero carbon emissions by 2030” in view of his eight million followers.

In response to the news, he typed: “Did they pledge this from aboard Sir Elton’s jet or the Clooney one?”

The Duke and Duchess of Sussex, who are currently living in their $14 million mansion in California, shared a mission statement on their Archewell foundation website today.

The couple said they will work with an “independent consultant to track all Archewell-related activities” from inception to “understand our collective footprint”.

Last night, the Queen failed to mention Prince Harry in one of her most personal speeches ever at the opening of the global summit to discuss action on climate change.

Her Majesty addressed world leaders with a  powerful plea where she praised Prince Philip and gushed over Prince Charles and Prince William for carrying on her late husband’s work to protect “our fragile planet”.

Posting on Archewell today, Harry and Meghan commented that they have “actively made choices to offset and balance their carbon footprint” but that “nearly every activity in daily life results in the release of carbon into the atmosphere”.

They added that they will be looking at “what they eat” and “how often they eat it”, as well as their commute and use of heating and electricity, in order to cut down their footprint.

Referencing COP26, where world leaders and senior members of The Firm have met this week, they said: “As global leaders convene for COP26 to commit to solutions for our climate crisis, all of us at Archewell, led by The Duke and Duchess of Sussex, share our pledge towards a more sustainable future by becoming net-zero by 2030.

“Our co-founders, Prince Harry and Meghan, The Duke and Duchess of Sussex, have a long-standing commitment to the planet, both together and prior to their union, with global projects and partnerships dating back over a decade.”

They added they would be working with an independent consultant to track internet use, commutes, and electricity in home offices with the hope of going net-zero by 2030.

They added a link to netzeroclimate.org which explains how to go “net-zero”.

The website explained: “Net-zero refers to a state in which the greenhouse gases going into the atmosphere are balanced by removal out of the atmosphere.

“The term net-zero is important – for CO2 at least – this is the state at which global warming stops.”

The statement was released hours after the Queen neglected to mention her grandson Harry at the COP26 conference.

Royal watchers have claimed the decision not to namecheck her environmentalist grandson while addressing COP26 last night was a “glaring” omission, because the Duke of Sussex and his wife Meghan have been very vocal about green issues.

However, Prince Harry’s often scrutinised Travalyst venture, which works in partnership with Skyscanner, Tripadvisor and Booking.com, has been used as an example of how the couple is presenting their image through their work.

Its agenda is to incorporate environmentalist strategies to combat climate change, such as carbon offsetting.

Royal insiders have said this is one of the main tactics that Meghan and Harry have used to justify their use of private jets, including Sir Elton John’s.

The Duke’s attempt through the venture at convincing the public that travelling by plane is not without environmental consequences has been criticised on social media.