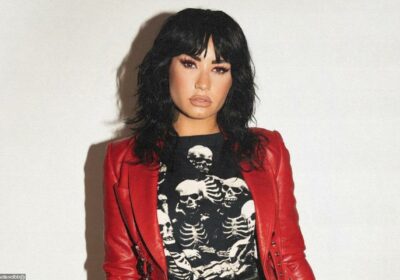 When opening up about their sobriety, the ‘Sorry Not Sorry’ singer explains that they are ‘in such acceptance of my life the way that it is that I really rarely think about substances.’

AceShowbiz –Demi Lovato “rarely” thinks about drugs anymore. The “Cool for the Summer” hitmaker previously struggled with addiction and spent time in a rehabilitation clinic back in 2018 following an overdose but has now “accepted” a lifestyle of sobriety.

“I’m in such acceptance of my life the way that it is that I really rarely think about substances, which is a beautiful thing and something that I never thought would happen to me,” the 29-year-old pop star said. “And I just realized that none of it works for me. What’s come into my life is acceptance.”

Demi, who shot to fame as a teenager and starred in the hit Disney Channel movie “Camp Rock” as well as in the title role of sitcom “Sonny with a Chance“, went on to explain that the journey to sobriety was such a long one because the desire wasn’t truly there. However, they now insist that cutting out drugs and alcohol is completely the only thing that works.

Speaking on Mix 104.1, the “Sorry Not Sorry” hitmaker shared, “I had people around me that wanted me to be sober. I don’t think that I wanted it.” They added, “And now, I made all the bargaining choices and I realized that none of it works for me.”

Demi, who has been fully sober since the end of 2021 but had previously claimed to be “California sober” and thereby replaced alcohol with marijuana, announced a return to music in June. They explained being completely sober was the “best way” to record a new album called “Holy Fvck”, which is due for release on 19 August.

“After going through even more stuff last year, I came out of treatment again and I realized, I really want to do this for myself and I want to make the best album possible, something that really represents who I am,” they stated. “The best way to do that and the easiest way to do something the most authentic is to do it clean and sober. I made this album clean and sober. I can’t say that about my last album, but this one, I’m really, really proud about.”