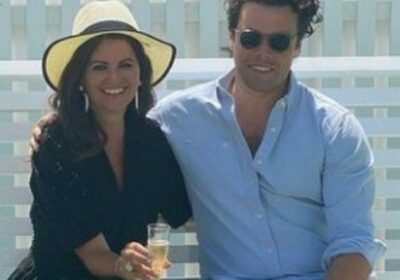 Deborah James has candidly discussed the issues she has been facing with her mobility after reaching the final stage of her life.

The 40 year old star, who has been battling bowel cancer for five years, announced to her Instagram followers earlier this week that she has been moved onto end of life care.

Deborah was just 35 years old when she was diagnosed with stage three bowel cancer in December 2016, which later moved on to stage four.

And the BBC podcast host has now explained that she will be spending the last days of her life at her parents' home in Woking because her own home in Barnes has stairs which she can no longer walk up.

Speaking to The Times, Deborah explained that she tried spending time at her home in Barnes recently but couldn't – and now requires the help of her husband, Sebastian.

"I tried, but I can't use my legs anymore, and I'm incredibly weak, so I can't get up or down, and my husband must lift me for everything. My house is a townhouse with lots of stairs," she explained.

In comparison, Deborah said that her "parents live in a bungalow with a garden".

"I just want to sit for my last moments on the lawn with my family around me," she said.

She has also been joined at her parents' home by her siblings and her children, Hugo, 14, and 12 year old Eloise.

This comes after Deborah shared her heartbreaking final wish for "more life" with her children as she appeared on BBC Breakfast on Wednesday.

"All I want right now is more time and more life," the brunette star said.

"I've always said I don't want to leave any stone unturned – I don't think there isn't a stone we haven't tried to un-turn to make my liver work again in order to get my body functioning," the journalist added in her interview.

"Unfortunately, I'm exhausted – I'm absolutely exhausted. We've got to the point now where I can't really do anything more."

In Deborah's "final" column for The Sun she spoke about the incredible donations her BowelBabe fund received since its launch on Monday writing: "In just 16 hours we've already raised a staggering £1.1million [the amount at the time of writing].

"I'm just blown away, never in my wildest dreams did I think we'd hit that total in just 16 hours."