Home » Celebrities » David Beckham reveals bloodied nose after Harper, 10, bit him when he tickled her 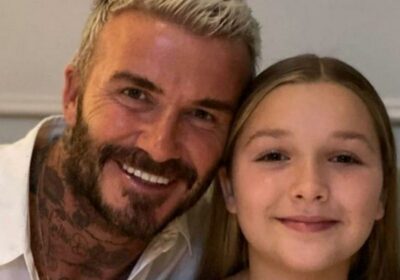 David Beckham has unveiled a shocking injury he received from his daughter Harper.

The former footballer, who has an incredibly close relationship with his 10 year old child, revealed the grim and bloody reality of what can happen when parents play fight with their children.

The 46 year old dad-of-four shared a snap of his bloodied nose on Instagram after Harper bit him, and it was all because he wouldn't stop tickling her.

David posted the shirtless selfie to his Stories, showing the results as he grimaced for the camera.

"Note to self," David captioned over the top of the snap.

"When tickling your daughter don't put your nose near her mouth."

The sport pundit clearly saw the funny side of their rough and tumble mishap, as he finished off the text with a wincing laughter emoji.

But for fans of the hunky star, many would have been taken-aback to see the blood streaming down David's normally-perfect nose.

The dad and daughter duo recently enjoyed a much calmer bonding moment when they cooked breakfast together.

In a video filmed by mum Victoria Beckham, David was taking his duties seriously as he taught his youngest how to boil an egg.

Harper had her long hair styled into plaits and was already wearing her school uniform as she hovered over the cooker in the kitchen.

The pair's adorable connection was evident and as Harper successfully placed an egg in the pan of boiling hot water, she then turned to her dad with a grin.

David leaned down for a big kiss with his daughter and then the little girl beamed at her mum, who hadn't lost her sense of humour while waiting for breakfast.

"Good job Harper is learning from daddy and not me," the star giggled.

For all your latest updates on the Beckham family, sign up to OK!'s daily newsletter.