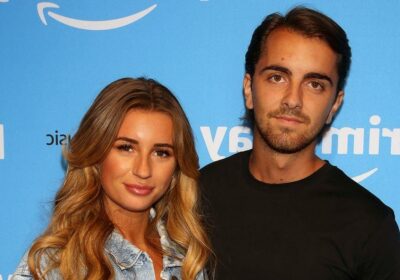 Sammy Kimmence has broken his silence for the first time since his ex Dani Dyer announced she's expecting twins with footballer Jarrod Bowen.

Dani, 26, who is the daughter of EastEnders actor Danny Dyer and found further fame by appearing on season 4 of Love Island, took to her Instagram feed on Friday 20 January to share the news with her millions of followers.

The star posted a photo of her son Santiago, who she shares with Sammy, holding up a board which read: "I'm going to be a big brother to twins," alongside two sonogram snaps. Captioning the post, Dani wrote: "Our little TWINS. So excited to meet our babies and watch Santi be the best big brother…

"The biggest surprise of our lives but feeling SO blessed… Our family is getting a lot bigger and I can't wait."

Sammy, who was released from prison last year after going in for scamming pensioners out of £34,000 by posing as a financial advisor, has now spoken out for the first time.

Taking to his own Instagram feed, Sammy decided to pay tribute to his son Santiago as he turned two years old.

Sharing a reel of videos and photos of the youngster growing up to Ed Sheeran and Aitch's My G, Sammy wrote: "Wow, what an emotional day my little boy is two.

"The happiness you bring to my life and others around you is unimaginable, you don’t know how much being your dad means to me. I’m a blessed man to see you growing in to an amazing boy," followed by a blue heart emoji.

Many of Sammy's followers were quick to comment, further wishing his son birthday wishes. One person said: "Awwww happy 2nd birthday to Santa !!! Hope he had a lovely day !!! Xx".

It comes after Dani recently showed off her blossoming baby bump in a crop top and pyjamas as she documented her pregnancy journey with twins in her TikTok video.

The actress began by telling fans she and Jarrod have been "keeping a big secret". As she reflected back on the pregnancy, the mum-of-one shared clips of her watching her body change and bump grow in the mirror.

In the first video, the stunning blonde could be seen twisting and turning as she smiled and showed off her tiny bump for the camera.

While in the next clip, Dani seemed much further along as she unveiled her belly under a pair of white cotton PJs.

Wearing her glasses and her hair up in a loose bun, the expecting mum smiled as she seemed excited to capture the latest changes in her bump.

The video then flashed forwards to Dani and Jarrod posing for a photo shoot as the pregnant star's bump was shown fully blossoming.