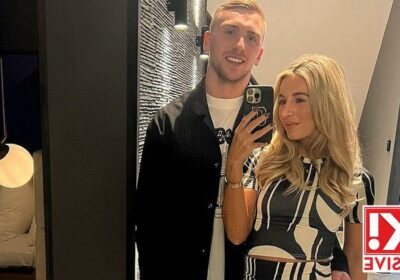 She recently celebrated her one-year anniversary with boyfriend Jarrod Bowen – and it looks like a Christmas engagement could be on the horizon for Dani Dyer and the West Ham footballer.

Dani – who has described Jarrod as the “boyfriend I’ve always dreamed of having” – has told friends she’s ready for some bling on her finger.

A source told OK! , “Dani and Jarrod are so loved-up. They recently celebrated a year together and the time has gone so fast. Jarrod treats her so well and he’s amazing with her little boy Santiago. Dani’s family love him and know she’s found a good one.”

They added, “Dani definitely thinks he’s The One and she’d love a ring on her finger. They’re in a really happy place and she knows there’s no need to rush things, but she would love for him to propose and friends think it could be on the cards.

“A Christmas engagement would be lovely. She’s had a tough time in past relationships but she’s finally got her fairy tale.”

Last week, the former Love Island star, 26, and Jarrod, 25, enjoyed a getaway to Disneyland Paris with Dani’s son, 22-month-old Santiago, who she shares with her ex Sammy Kimmence.

The trip came soon after the couple celebrated their one-year anniversary together. Dani marked the special occasion by sharing a pic of the two of them alongside a gushing tribute to Jarrod.

She wrote, “One year of loving you. Happy anniversary baby… you’re the boyfriend I’ve always dreamed of having… grateful for someone as kind and special as you.”

Dani and Jarrod confirmed they were dating four months after her former boyfriend Sammy was jailed in July 2021 for three-and-a-half years for scamming two pensioners out of £34,000.

After the sentencing, Dani ended her relationship with him as he had lied to her about his crimes.

Dani has spoken previously about how a wedding is top of her priority list. During an Instagram Q&A earlier this year, the star was asked if she wanted more children and she replied, “Absolutely!! But [ring emoji] first.”

And Jarrod has received the seal of approval from Dani’s dad, EastEnders actor Danny Dyer. He told his daughter on their podcast, Sorted With The Dyers, “I’m probably more in love with your boyfriend than you are. West Ham are my one true love.

"I think I love West Ham more than anything else on this planet!”