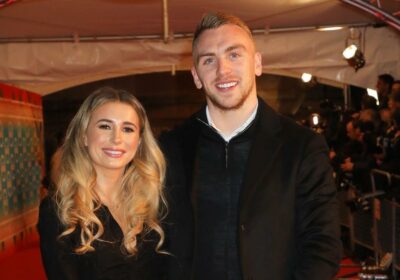 Dani Dyer has been spotted looking overjoyed as she made her red carpet debut with new boyfriend Jarrod Bowen.

The former Love Island star, whose dad Danny recently broke his silence on his EastEnders exit, and her footballer beau looked loved-up at the opening night of Cirque du Soleil's LUZIA at the Royal Albert Hall in London on Thursday 13 January.

This is 25 year old Dani's first official public relationship since her split from Sammy Kimmence, who is the father of her son Santiago, after he was sentences to 3.5 years in prison.

Walking the red carpet, the reality star looked beyond happy as she wrapped an arm around Jarrod, also 25, as they posed for pictures.

Gorgeous as always, Dani donned an all-black ensemble, featuring a long-sleeved cut-out top that showed off her toned midriff alongside a pair of flared trousers.

Teaming the outfit with strappy heels and a black handbag, the blonde beauty styled her mane down into loose waves that cascades down her front.

Wearing a full face of make up for the occasion, Dani donned black eyeliner and mascara, blush and a red lip.

Meanwhile, her other half Jarrod looked dapper in a black jumper with skinny matching trousers and boots, alongside a black jacket.

The pair's appearance on the red carpet comes after Dani was praised for improving Jarrod's performance on the football pitch.

After Jarrod scored two goals against Norwich City for his club, giving them a 2-0 win, fans hilariously took to Twitter to praise Dani for her positive effect on his skills.

One fan wrote on Twitter: "Witt is dani dyer doing to Jared Bowen man he’s been on fire since they started going out."

A third joked: "The Hammer of the Year award is gonna be a tight race between Jarrod Bowen and Dani Dyer."

Another shared: "Dani Dyer is close to making Bowen the best RW in the league," while a fifth added: "dani dyer, the signing we never knew we needed."

One fan even suggested Dani, who recently branded Jarrod "very fit" in a romantic snap, could do some good for the England squad, writing: "Jarrod Bowen. Get this man in the England squad and replace Southgate with Dani Dyer."

For all your updates on Dani Dyer, sign up to our daily OK! newsletter.