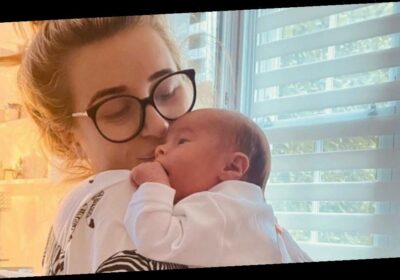 Dani Dyer has candidly opened up on how she’s finding motherhood after giving birth to her adorable baby son Santiago.

Love Island star Dani, 24, admitted she’s “always questioning herself as a mum” as she answered queries from fans on her Instagram story.

Dani got candid as she invited her 3.4million followers to quiz her in the Instagram question and answer session.

One fan asked how Dani’s boyfriend Sammy Kimmence, whom she recently made an emotional tribute to, is doing after becoming a father.

Dani then admitted he’s been a great support after she has been questioning herself as a mother.

She wrote over a photo of her adorable newborn son: “Honestly he has been brilliant.

“I didn’t think could love hum anymore than I do, his so supportive.

“I never realised how emotional you get after having a baby and he always makes me laugh”.

New mum Dani then revealed: “Your always questioning yourself as a mummy so having a good support system is so important” [sic] followed by a red heart emoji.

During the question and answer session, Dani was also asked if she felt “overwhelmed all the time” by a fellow new mum.

She then answered with: “Yes” followed by two laughing face emojis.

“I didn’t realise how emotional you get once having a baby. When my mum mentioned it I thought oh I’ll be fine” Dani wrote, followed by an eye roll emoji.

New mum Dani continued: “I look at him sometimes and well up because I can’t believe he was in my belly..”

Dani, who recently admitted she hasn’t washed her hair since giving birth, also gushed over being a mum to her adorable baby boy Santiago despite her own doubts.

When asked how her little boy was doing she said: “He is honestly my world.. I never thought I could feel a feeling like it” followed by a red heart emoji.

She added: “I get emotional even talking about him.”

Dani also revealed she has been flooded by questions from fans asking how she was as one fan asked how she was doing during the Q&A.

Love Island beauty Dani said: “So many of you asking how I am.. Thankyou I am honestly really good, although were in a pandemic I’m so glad I’ve got this time to just spend with my baby and enjoy every moment with him.. [sic]

“It’s such a special time and I still can’t believe I’m now a mummy haha x”.