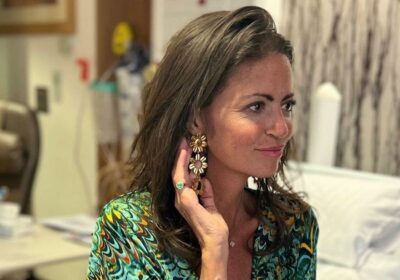 Fans of the lateDame Deborah Jamesgot an insight into her touching last moments with her family in the recent moving BBC documentary titled Dame Deborah James: The Last Dance which aired on Thursday 30 June on BBC Onepaying tribute to Deborah, who raised over£6 million for cancer charities.

The podcast host and journalist, who also went by the nickname 'bowel babe', sadly died on Tuesday 28 June aged 40, withher family announcing the news in a heartbreaking statement on social media.

Deborah's family were filmed in the documentary as they stayed close to her and spent precious time with her at the end.

The mother of two was filmed on the sofa as a close family member showed her the webpage for the BowelBabe fund on a laptop as it hit its latest milestone.

During the moving documentary, Deborah spoke about the fund, she said: "Before I died, the one thing I knew I wanted to do is set up a fund that can continue working on some of the things that gave me life."

The popular campaigner’s family took a snap to mark the amazing donations the fund received. Since her death, Deborah's fund has surpassed an incredible £7 million that will be used to help fund clinical trials and research into cancer.

The documentary saw many of Deborah's friends talking fondly of her, including broadcaster Gaby Roslin and her co-hosts on You, Me & The Big C podcast, Steve Bland and Lauren Mahon, as well as TV presenterLorraine Kelly.

Deborah's family announced the sad news that she'd passed away on 28 June on Instagram.

They posted a stunning photograph of Deborah in a white mini dress along with a clip of her dancing, and penned a lengthy statement along with a note from Deborah herself.

"We are deeply saddened to announce the death of Dame Deborah James; the most amazing wife, daughter, sister, mummy. Deborah passed away peacefully today, surrounded by her family.

"Deborah, who many of you will know as Bowelbabe, was an inspiration and we are incredibly proud of her and her work and commitment to charitable campaigning, fundraising and her endless efforts to raise awareness of cancer that touched so many lives."

The statement continued: "Deborah shared her experience with the world to raise awareness, break down barriers, challenge taboos and change the conversation around cancer. Even in her most challenging moments, her determination to raise money and awareness was inspiring."