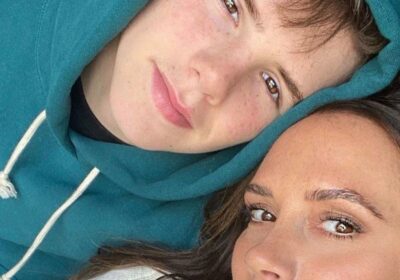 Cruz, the youngest son of the Beckham's, has taken inspiration from his Posh Spice mum and looks set to have a shot at a pop career.

The 16 year old has decided to head to the recording studio instead of lacing up his football boots like his dad David.

Cruz uploaded a couple of photos of himself to Instagram and some of his famous friends and 1.8 million followers were thrilled for his new career path.

Fellow pop star and future Dancing On Ice contestant, Connor Ball, could not contain his excitement. The Vamps singer wrote: "Excited to hear this brother!"

Derek White, a family friend and CEO of a marketing agency believes Cruz has something very special lined up.

To receive direct updates on all the biggest celebrity news stories straight to your inbox, sign up for OK!'s daily newsletter here.

He exchanged with David and Victoria's boy about how prepared the world might be for the next generation of Beckhams. The businessman wrote: "They are not ready for the Cruz heat! Excited for you."

The pop star of the future commented, "do you think everybody's ready??" to which Derek replied: "I don't think so. You're about to unleash a tidal wave."

There's been no sneak peak of what this recording session sounded like, but the young star in the making has already given a taste what he can offer.

The child prodigy first laid down some vocals in a recording studio five years ago. Back in 2016, as an 11 year old, he released a sweet Christmas song titled If Every Day Was Christmas.

The tune did not make an impact on the UK Top 40 but proceeds of the song did go to charity.

The big-hearted young Beckham donated proceeds of the cute single to Make Some Noise which, which targets disadvantaged children and young people.

He was snapped up by Scooter Braun, the manager of fellow child superstar Justin Bieber, who is behind Cruz's next move in the world of pop.

Cruz will be hoping he can replicate the Spice Girls and one day get that magical Christmas number 1. Watch out Biebs.

For more celebrity updates and the latest on the Beckhams, sign up for OK!'s daily newsletter here.