Home » Celebrities » Chrissy Teigen & John Legend Reportedly Bought An ENTIRE Row At Radio City Show So NO ONE Would Sit Near Them! 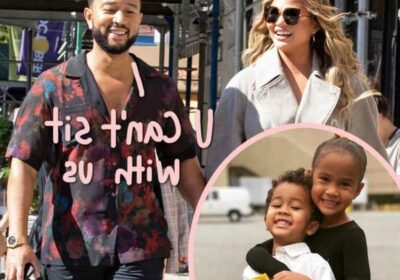 Chrissy Teigen just can’t find her way out of controversy!

The cookbook author and hubby John Legend are taking more heat for elitism after reportedly buying out an entire row of seats while attending Radio City Music Hall’s annual Christmas Spectacular over the weekend. Before you ask: no, this rumored purchase wasn’t made out of the kindness of their hearts to spread the holiday spirit to families who might not be able to afford the show otherwise. It was supposedly a way to keep people away from them. What?!

According to an eyewitness who spoke with Fox News, the couple took their children Luna, 5, and Miles, 3, to see the performance, which famously stars the Rockettes, on Friday. From the insider’s perspective, the A-listers had “clearly” purchased the entire row behind them “to avoid having anyone at their backs during the show.”

Photos from the family’s festive night out (seen HERE) only show their bodyguard sitting in the seats behind them, so it does suggest they had a hand in clearing those spaces. Why else would an entire row be empty during one of the most popular Christmas events in New York City??

Coming to their defense, a Radio City Music Hall spokesperson told Page Six on Monday that the celebs did not purchase the row in question — but they did not offer an explanation for the empty seats. Hmm.

If you’re wondering, it would likely cost more than $3,000 to snag all those spots for the evening. Radio City’s orchestra section, where the foursome was located, has a dozen seats per row, which are usually priced between $76 to $251 per seat. While that would seem crazy to the average family, just last month, the parents clearly dropped a staggering amount of money to host a “tone deaf” Squid Games party in their mansion. So this $3,000 is probably nothing to them!

Also, it’s not that ridiculous to think the family would shell out the additional cash to keep themselves safe amid COVID-19 concerns either. They were pictured wearing their masks during the entire performance despite the venue requiring proof of vaccination. TBH, we can’t blame the couple for wanting to be extra safe in the crowded venue. Buuut if they were so concerned about getting sick that they felt it necessary to buy an entire row of seats to keep unwanted germs away, then maybe they should have just stayed home instead?

As expected for the Hollywood stars, the source also noted that the famous fam snuck into their seats just before the performances began and the All Of Me crooner bowed out ten minutes early to avoid being seen. (Too late for that, though!)

The bodyguard was spotted directing Chrissy and the kids out of the venue once the curtains closed. The singer then continued his fun weekend by taking Miles to a Brooklyn Nets game, where they sat courtside. He couldn’t afford to buy out that venue — LOLz!!

Thoughts, Perezcious readers? Is it a reasonable thing to do for folks who have the money? Or does it just show someone completely out of touch with real people?

And if Chrissy and John really didn’t buy them, why was their bodyguard the only one in the row?! It just doesn’t add up! Let us know your best guesses in the comments (below).