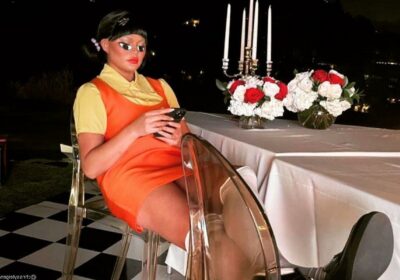 At the ‘epic’ bash, the cooking book author dresses as the murderous ‘red light, green light’ doll, while the guests wear green jumpsuits similar to the players’ on the Netflix series.

AceShowbiz -Having just returned to the spotlight in the wake of her past cyber-bullying scandal, Chrissy Teigen has again found herself landed in hot water. The model has caught the heat after hosting a “Squid Game“-themed party for a fun night with her friends.

“where do I even begin!! what an absolutely epic night,” the 35-year-old star posted on Instagram Sunday, November 14 along with pictures from the party. In the images, the cookbook author dressed as the murderous “red light, green light” doll from the hit Netflix series.

“my dream came true of watching my friends fight to the death!” she added in the caption, “dunk tank, musical chairs, hide and seek followed by a very riveting final game of pin the tail on the donkey. @wifeoftheparty you truly are the best and have THE BEST team ever. Thank you thank you thank you!! More pics to come!!”

Chrissy’s husband John Legend wore an animal mask and a fancy robe like the ones donned by rich people who sponsored the deadly game on the show. Meanwhile, the guests, which included “Modern Family” star Jesse Tyler Ferguson and “Pretty Little Liars” alum Shay Mitchell, donned green jumpsuits similar to the ones sported by the contestants of the game.

Unlike the South Korean survival drama, on which the desperate participants play deadly children’s games for the chance to win cash prize, the guests were competing for a trip to Napa and dinner at the Michelin-starred French Laundry restaurant.

Chrissy’s post has since drawn people’s ire, with many labeling the party “tone deaf” and calling out the “Bring the Funny” judge for her “complete lack of self awareness.” One baffled user asked, “Why do rich people always miss the whole entire point?”

Another criticized the party, “This is so beyond tone deaf as a millionaire to invite your rich friends over and reenact squid games which is rooted in the violence of capitalism.” Another elaborated, “I’m sorry rich people are literally so tone deaf. Squid Game was literally about people whose lives were so awful because of being poor that they’d rather play a game of literal life or death to escape going back to poverty and chrissy teigen is really reenacting it in her mansion.”

A fourth commenter called it “cringe,” while a fifth wrote, “The simply unmatched irony of john legend and chrissy teigen hosting a squid game party for all their rich celeb friends.” Another person tweeted, “Taking personal offense at the complete lack of self awareness Chrissy Teigen must have in order to throw a Squid Game-themed party where she watches her rich friends ‘fight to the death.’ The commentary just writes itself…”

“Usually I’m a fan of Chrissy Teigen but there’s something super f**ked up and weird about spending the weekend cosplaying Squid Game with your incredibly rich friends,” a disappointed fan even added.

Chrissy has not responded to the backlash, but comments on the said post have since been limited.