Home » Celebrities » Chris Lane, Lauren Alaina Team Up On ‘Dancin’ In The Moonlight’

Chris Lane, Lauren Alaina Team Up On ‘Dancin’ In The Moonlight’ 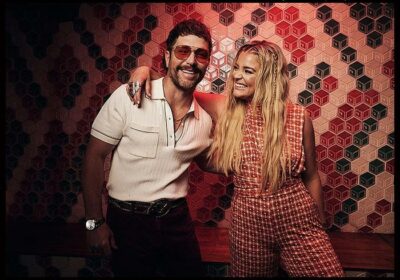 Country stars Chris Lane and Lauren Alaina have teamed up for a new duet, “Dancin’ In The Moonlight.”

Along with the track, Lane and Alaina shared the song’s music video on Friday (June 10). The video, directed by Justin Clough, was shot at Nashville’s speakeasy-style bar, Old Glory. The visual showcases the two country stars dressed to the nines in decade-specific staples, dancing and singing along.

Alaina joins him in the second verse, continuing the nightly celebrations that include going to “the hottest night club in town.”

“I’m so excited to have new music to share today alongside one of the most talented, fun people to work with, Lauren Alaina,” said Lane. “I love the classic feel it has, and I love that I get to share it with my second-favorite Lauren. Can’t wait for you to hear it, and to perform it all summer long!”

“I am beyond honored to be a part of ‘Dancin’ In The Moonlight’ for so many reasons,” Alaina shares. “The original is one of those songs that lives on for many generations. Everyone knows the original. I am excited to be a part of a new take on such an impactful and iconic song. I absolutely love the way it turned out. It’s an added bonus that I get to sing it with my buddy, Chris Lane. Hopefully, we can make it a hit again.”