Home » Celebrities » Chris Evans interrupts co-star’s proposal story after mix-up: ‘Not what it sounded like!’

Chris Evans interrupts co-star’s proposal story after mix-up: ‘Not what it sounded like!’ 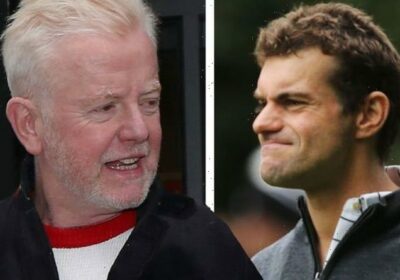 Despite Christmas being five months away, it didn’t stop Chris Evans and his co-star Vassos Alexander discussing potential surprises over the festive season, one being proposals. But an admission by the latter about his own engagement story caused Chris to brand him a “commitment-phobe”, following a slight misunderstanding.

It didn’t come across that way!

After reading out a listener’s message on-air as they celebrated their engagement after eight happy years together, it prompted the team to discuss long-term relationships and the end goal.

“I always think, and by the way this is only an observation,” Chris began.

“It’s clearly not a judgement because I don’t know what I think about it – eight years together, no engagement…

“Just eight years being together, very happily… what happens?” he asked Vassos.

“What’s the tipping point? Is there a mum’s net of long engagements and rules?”

His co-star chuckled as he replied: “Well, you’re speaking to someone who was together for nine years before we got engaged.

“The last couple of years, Caroline’s younger sister rather unhelpfully got engaged so I couldn’t really…” he was interrupted by Chris, who seemed baffled.

“Why do you frame it as unhelpfully?” he asked, curiously giggling.

Vassos continued: “Well I was about propose…

Choosing to ignore his pal’s banter, Vassos tried to continue: “I couldn’t steal her thunder by getting engaged…” but the host quickly interjected again: “It didn’t come across that way!”

Giving up on his own story, Vassos had a little tip for anyone out there who is thinking about proposing to their other half around the festive period, hoping to save them from “ruining Christmas”.

“The other thing to do is if you are in relationship and you’re expected to get married soon, don’t get earrings for a Christmas present,” he warned.

“A small box could be misinterpreted!”

“That was surprisingly insightful!”

Vassos shrugged as he added: “It might ruin Christmas!”

The Chris Evans Breakfast Show airs weekdays at 6:30am on Virgin Radio.