Cher Lloyd left devastated as she says goodbye to beloved dog: ‘Our hearts are broken’ 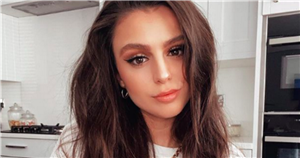 X Factor star Cher Lloyd has been left heartbroken after her French Bulldog, Buddy, sadly passed away this week.

Cher, 28, paid a touching tribute to her “best boy” on Instagram on Tuesday, confessing, “our hearts are broken.”

Sharing a series of cute snaps of her beloved pooch, the singer wrote: “Yesterday we said goodbye to Buddy.

“Our hearts are absolutely broken. You were such a good boy Bud, the best boy.

“Over 9 years of love, we will miss you and remember you forever.”

Earlier this year, Cher, who is mum to three-year-old Delilah Rae, revealed that she was 'sold the dream' and 'exploited' after The X Factor.

The singer, who was just 16 when she took part in ITV’s hit singing competition back in 2010, shared a video on TikTok about how she felt she’d been ‘exploited’ after she finished in fourth place on the seventh series of The X Factor.

Cher took an opportunity to duet virtually with American singer Lyn Lapid, who started the song with the lyrics: “She was only 17 when…”

To which the popstar replied with her own written lyrics which seemed to be a dig at the music show.

“How could I be so naive?” she began. “They sold me the dream just to exploit me.

“Said darling darling you’ll go far if you shake that ass and date a star,” Cher continued. “And if the record’s taking off we’ll take the money.”

Last year, Cher claimed that music bosses tried to pressure her into entering a fake romance with a fellow celebrity to boost her fame.

Despite topping the charts with her debut single, Swagger Jagger, in 2011, Cher says she was asked to date a fellow star in order to boost her profile.

However, Cher refused as she claimed being “fake” goes against her nature.

She told The Sun: “They gave me a few suggestions but it was just a crazy thing to ask.

“Sadly it still happens. That’s still happening in this day and age – that it’s still OK to try to make a young girl do something like that to boost a career,” she went on.