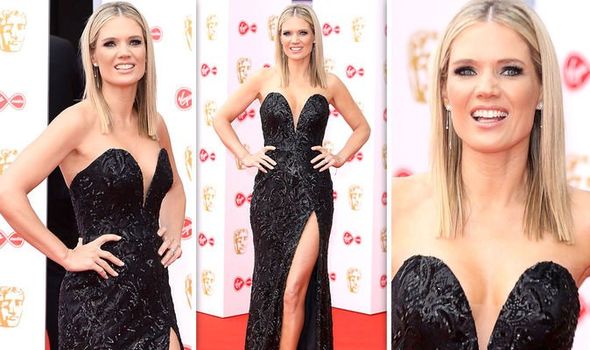 Charlotte Hawkins was joined at the BAFTA TV British Academy Television Awards 2019 by her Good Morning Britain colleagues Kate Garraway, Susanna Reid and Laura Tobin this evening. The presenter however made sure all eyes were firmly on her by ignoring the legs or chest rule, and pulling it off to full effect. The 43-year-old’s incredible figure took centre-stage in her daring dress, which left little to the imagination. Wearing her blonde tresses down, she sizzled in front of photographers in a black, floor-sweeping get-up.

Charlotte happily exposed plenty of leg thanks to the frock’s thigh-high split, while her dramatic train trailed behind her.

She appeared to be going braless in the strap-free look, which sparkled in the sunshine thanks to plenty of glitzy embellishment.

The eye-popping neckline was cut dangerously low while her attire showed off her slender physique.

Not content with her sparkly look, the mother of one also chose metallic heels and dangly earrings.

Charlotte, who has worked on GMB since 2014, polished off her number with a matching clutch bag and a sleek hairdo.

Meanwhile, Susanna Reid also opted for the same, classic hue, but risked a nip slip in a jaw-dropping dress.

The 48-year-old showcased her recent weightloss and her ample assets thanks to a bold, sheer offering.

She kept her modesty thanks to some strategic lace detailing, while the bottom of her gown featured voluminous tulle.

The mother-of-three dazzled as she posed before heading inside Royal Festival Hall, where GMB is up for a statuette.

Susanna also added a sheer pair of stilettos while sporting an elegant up ‘do and a slick of red lipstick.

Kate Garraway went for a cleavage-baring red dress, which came complete with a cut-out neckline and feathers throughout.

With her hair down in glamorous waves, the 52-year-old beamed in her head-turning prom-style ensemble.

Weather presenter Laura Tobin also went for a similar shade, but hers came in the form of a pleated dress.

It highlighted her chest with a sheer, V-neckline and was made from a sparkly material with thick steps.

She wore her dark tresses over one shoulder in a soft wave, alongside lashings of eye make-up.

Good Morning Britain airs weekdays at 6am on ITV, while the Virgin Media BAFTA TV British Academy Television Awards will be on BBC One tonight at 8pm.