Home » Celebrities » Charlene White cries over restrictions at aunt’s funeral at same time as No.10 party

Charlene White cries over restrictions at aunt’s funeral at same time as No.10 party 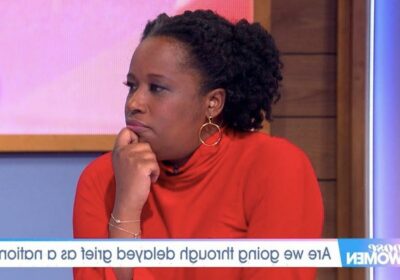 Charlene White couldn't help but break down into tears as she discussed the Downing Street party that took place while the rest of the UK was ordered to self-isolate.

The 41 year old, who recently explained why she doesn't wear a poppy on screen, appeared on the ITV programme Loose Women on 13 January to discuss the concept of "delayed grief" as many have expressed their anger over the No.10 party that took place during lockdown.

While the government placed lockdown measures for all, that extended to funerals and weddings, Boris Johnson attended a work party on 20 May 2020.

"We wanted to do our bit, we wanted to save the lives of those who were at risk, those who did have an underlying condition. So many of us were doing the right thing.

"There were loved ones you missed as a result of sticking by the rules and my family stuck by the rules. We had to bury family members without being able to hug each other."

Choking up, she continued: "I had to sit in a crematorium while my aunt was buried, because I wasn't living in the same household as my brother and sister and my dad, in a cube by myself with my baby daughter on my lap as we were all in floods of tears because we couldn't hug each other.

"I stood by the graveside as gravediggers were filling that grave and watching my cousin in floods of tears and not being able to hug her because we were following the rules. Because we didn't know what else to do."

Pausing to accept a tissue as she cried, Charlene continued: "We were told we had to follow the rules, we were following the rules with the understanding that those in charge were doing the same thing. It's so weird, I mention delayed grief because it comes in waves for me. There are so many of us who haven't grieved at all."

Fans of the show immediately flocked to Twitter to share their thoughts as many could relate to Charlene's feelings.

One person wrote: "Listening to Charlene White bought a tear to my eye. So many of us experienced similar, following the rules whilst they were having a garden party #LooseWomen".

Another said: "#LooseWomen I totally understand Charlene on the 16th February 2020 my dad was laid to rest the amount of family and friends we didn't invite because we were following the rules".

While a third added: "Boris made Charlene White cry…girls are we ready to fight?!? #LooseWomen".

For all your updates on Charlene White, sign up to our daily OK! newsletter.