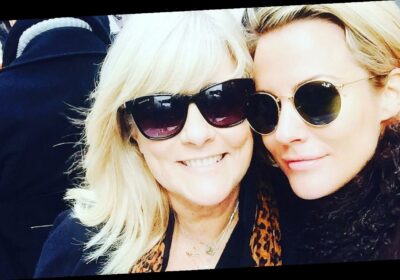 Christine takes aim at the social media giants, accusing them of playing a part in harming young girls as the grieving mother talks about late daughter following her tragic death.

AceShowbiz –Caroline Flack‘s mother has hit out at social media companies for “failing to protect anybody.”

The TV presenter took her own life last year at the age of 40, and her mum Christine has admitted the former “Love Island” presenter would “look at her phone all the time” and, even if several people were praising her, she would always focus on the “one bad thing said.”

“Carrie was the worst one – she looked at her phone all the time. It took her over, what was being said. And there could be 30 nice things said, one bad thing said, and that was it.”

Christine was speaking ahead of the Channel 4 documentary, “Caroline Flack: Her Life and Death“, and she recently admitted Caroline “didn’t handle heartbreak well.”

She explained, “She had a long relationship when she was in Cambridge but that ended and then we got a call, she’d taken some pills, she spent time in hospital and then you could tell it wasn’t right, her reaction wasn’t right. Yeah, she didn’t handle heartbreak well.”

“We went through all the doctors and they saw to her and thought no it’s just a one off but there was always that fear after then that… I don’t know, you always worried in case anything happened.”

Caroline’s twin sister Jody, 41, added, “It feels so weird talking about it because I know it’s something she never wanted anybody to know about.”

“Each serious boyfriend, she sort of took a lot of tablets, drank a lot, and ended up in an A&E situation a lot of times. She really didn’t think she could cope with that feeling so it was her trying to control it.”