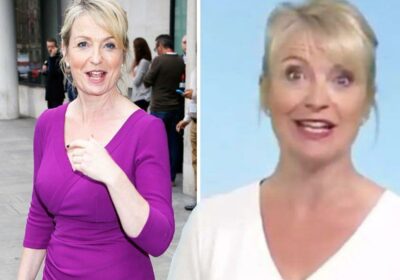 Carol Kirkwood has been presenting the weather on BBC Breakfast since joining the team back in 1998 and has been a firm favourite among viewers for over two decades. The weather forecaster recently reacted to a Twitter user who praised the meteorologist.

The 59-year-old took to the micro-blogging site and gave her 227,000 followers a weather update on Wednesday.

Sharing a screenshot of a weather map, the BBC favourite explained that there will be less sunshine as we head further into the week.

Carol wrote: “Isolated showers developing this afternoon in the west (most will miss them).

The social media user reacted to the post and gushed over Carol’s appearance before the person in question shared they were forced to tune into ITV weather after having signal problems in a cheeky swipe.

Twitter user Phil Davies, penned: “Loved the dress today, because of signal problems had to watch ITV yesterday. It made me realise how clear and coherent you are. Thank you.”

He is set to replace Sian Williams as the news anchor on Channel 5 and revealed it was a “massive decision” for him.

However, since his announcement, rumours have been rife as to who will replace him and present alongside co-host Sally Nugent.

Now, fans think they have figured it out.

Some social media users have suggested that Carol should step in and take the sofa.

Ian Ansell commented: “Not sure we’ve had a weather presenter take the sofa? This opens up bringing the mighty Carol Kirkwood in.”

Gary Williams added: “Opportunity for a shakeup! Like, have a woman sit on the left side of the screen? #CarolKirkwood.”

Chrissy Tailsmore thought: “Oooh, Carol Kirkwood to replace Dan maybe? Would be nice to see two women present for once! Us viewers have figured it out!”

Ian Brindle tweeted: “I wonder if BBC will go with Owain Wyn-Evans for BBC Breakfast job… definitely been getting him ready for a big job.” (sic)

There has been no confirmation of who will be replacing Dan on BBC Breakfast.

BBC Breakfast airs daily on BBC One at 6am.