Camille, 50, finalized her divorce from the 64-year-old "Frasier" star in 2011. At the "Real Housewives of Beverly Hills" reunion, Camille, who shares daughter Mason, 17, and son Jude, 14, with the actor, revealed she kept the last name "Grammer" for her children, despite marrying David C. Meyer in October 2018.

“I took Grammer off my social media. It’s still on my passport," she said, adding, "David is all for it. He said, ‘Your kids — both of your kids’ last name is Grammer. I understand that.’ He has no problem.”

When questioned why she took her hefty sum from Kelsey when they split – unlike fellow "Housewife" Denise Richards, who didn't take a huge amount of cash from ex Charlie Sheen – Camille stood her ground.

I sat at his bedside for eight days straight while he was in the cardiac intensive care unit in NYC. I read him poetry and helped [wash] his hair. Now I don’t exist.

"Well, I was married for 13 years. That’s a long time," she said. “I just felt that, you know, working — and I worked hard. I just didn’t sit back, buying fancy clothes and shoving bonbons in my face. I mean, I worked hard.”

She accused the thespian of not reaching out to her after a wildfire destroyed her Malibu home. Kelsey's rep told Fox News of her allegation, “Kelsey does not comment on statements made by his former wife. FYI, he did reach out to his daughter.  His son was staying with him at the time." 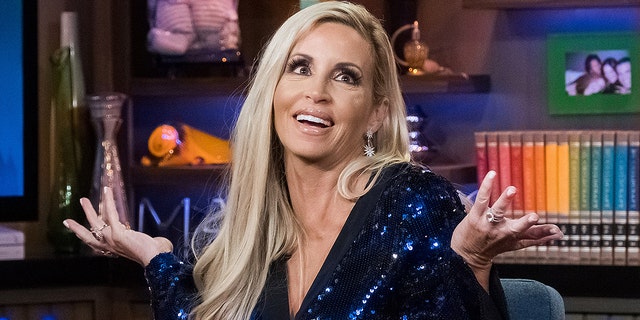 Camille Grammer appears on Bravo’s "Watch What Happens Live." The "Real Housewives of Beverly Hills" star has been quite candid about her 2011 divorce from "Frasier" star Kelsey Grammer.
(Getty / NBC)

When a fan recently questioned Camille about how she feels about Kelsey and his fourth wife, Kayte Walsh, Camille said she wishes the couple well, but added, "What’s unnerving is that fact I was there to help him get through some of his hardships and supported his career and his sobriety. I was [right] by his side and he acts like I never existed; that’s disappointing. We were together through his success.

"I was there during the writers strike and the cancellation of 'Back to You.' We moved the company to our home in Malibu. I sat at his bedside for eight days straight while he was in the cardiac intensive care unit in NYC. I read him poetry and helped [wash] his hair. Now I don’t exist," Camille stated.