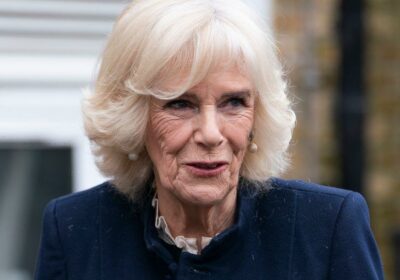 Camilla has been congratulated on her “big promotion” in light of becoming Queen Consort in recent months as husband and former Prince Charles became King.

King Charles became King after his mother Queen Elizabeth’s passing, with his coronation set to take place in May next year.

Before her death, the late monarch expressed her wishes ofCamilla becoming Queen Consort.

Queen Elizabeth said at the time: “When, in the fullness of time, my son Charles becomes King, I know you will give him and his wife Camilla the same support that you have given me; and it is my sincere wish that, when that time comes, Camilla will be known as Queen Consort as she continues her own loyal service.”

In light of her new and important royal role, Camilla was congratulated during a recent engagement as she visited The Emmaus Community at Bobby Vincent House in West Norwood in London on Tuesday, 13 December.

She visited the area to learn about Emmaus's work in the UK to develop women-only provisions and how a women-only space is often important for women who have experienced homelessness.

Speaking to a member of staff at Bobby Vincent House, they said to Camilla, as perMail Online: “It clearly hasn't gone unnoticed to any of us Ma'am that you've recently had a big promotion at work. So we're extremely proud and grateful that you've chosen to join us and our community.”

Camilla has been patron of Emmaus UK since 2006 and has toured many of its communities across the country which have been helping the homeless, known as “companions”, for decades.

The first Emmaus Community was founded in Paris in 1949 by Abbe Pierre, a Catholic priest, MP and former member of the French Resistance.

In a brief speech to mark her visit, the Queen Consort said about the homeless charity: “Every time I come and visit one I always come away with the same impression that, you know, you have this wonderful feeling of community and people looking after one another – and that’s what Emmaus communities are all about.

“So I’d like to thank everybody who’s involved, for in making it all work and of course all of the companions – I’ve talked to so many and they always say the same thing, it’s obviously their confidence (that) gets boosted by coming here and they find a path into starting their life again.”

Camilla added: “I was very interested to hear about the women’s community, which I think is very important.”