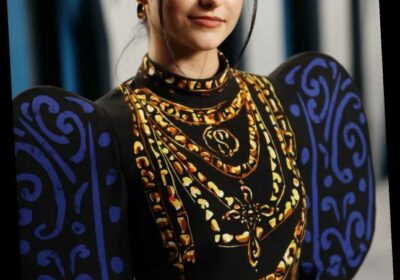 Camila Mendes is officially a single lady. After a little over a year, the Riverdale star has parted ways with her photographer boyfriend Grayson Vaughn, but she seems to be handling it like a pro. Look no further than Camila Mendes’ Instagram post after her Grayson Vaughn breakup, which celebrated selfhood.

On Thursday, March 18, the actor shared a series of selfies she took in a bright blue jean jacket on Instagram, simply captioning the post: "Selfhood." It seems like she was hinting at her newfound singlehood, and on Friday, March 26, Mendes also shared a post on her Instagram Story about men being emotional. "I’m not sure how men did it, but convincing the world that women are the emotional gender is the most successful scam in history," the post read, and Mendes captioned it "this."

But Mendes and Vaughn’s actual relationship timeline is a little more complicated. On March 26, E! News published a report from an anonymous source confirming the couple ended things about a month ago.

"There was no drama at all, and they are still friends. Their relationship just ran its course," the source explained. If that’s not enough to convince you, Mendes also deleted all the pics of Vaughn on her Insta feed, and no longer follows him on the platform (although he still follows her).

Dealing with a long-distance relationship definitely seems to have contributed to their breakup, since the 26-year-old returned to Vancouver to film Riverdale Season 5 last fall. "Camila has been shooting in Canada and travel has been banned, so the pandemic didn’t make it easy to see each other," the source added.

Ironically, Mendes officially confirmed her relationship with Vaughn for the first time when she left California last September. At the time, she shared a couples selfie of the pair kissing on a jetway, with the caption, "That long distance kind of love."

More recently, she gave him a sweet birthday shout-out in October, writing on Instagram, "You just had to be a Scorpio huh. Love you birthday boi." While it’s unclear exactly how long the two were together, Us Weekly reports they were first photographed together back in February 2020 during Milan Fashion Week in Italy, and were later spotted running errands in Los Angeles.

Now they’ve officially parted ways, but Mendes is busy at working on Riverdale Season 5 and seems to be taking time for some important self-love in the meantime. You love to see it!