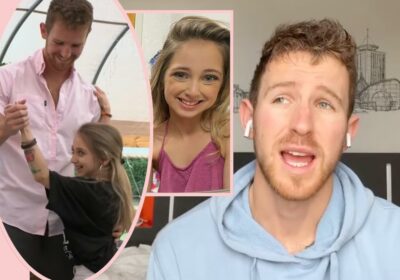 The growing I Am Shauna Rae controversy continues!

Last week, TLC‘s latest reality hit got a lot more attention all of a sudden over a December episode in which star Shauna Rae Lesick starts going on dates with a new guy. The issue? Well, if you’ve never seen the show, Shauna’s growth was stunted due to brain surgery when she was a child. She’s now 23 years old but — as TLC puts it in their show description — “at 3 feet 10 inches, she’s stuck in the body of an 8-year-old.” That makes dating extra tricky. The reality star herself explained on the show:

“My romantic life kind of sucks. I think I’ve dated, like, seven people. I attract creeps, a**holes, you know, like the typical quote-unquote bad boy, and idiots.”

Creeps, a-holes, and idiots? Sadly, that’s the same ocean ALL women have to navigate, right??

But seriously, as her parents are all too keenly aware, the potential for the first category of trash guy — “creeps” — is extra high here for obvious reasons. So after the episode when viewers met Dan Swygart, a hunky “world-traveler” from Wales who reached out to Shauna after Season 1 — and flew to Long Island just to go on some dates with her — well, let’s just say the rubber met the road. Hard.

Despite dates in which they cooked together, paddle boarded, kayaked, and slow-danced, neither seemed to want to put a label on what was going on between them. But Shauna did eventually say in a confessional:

“Dan and I have kissed, I’ll just put that out there. We’ve kissed.”

Comments called the 26-year-old “sick” and “creepy” for wanting to date a woman who looked so young. And he responded by saying:

“It’s very important to remember that Shauna is an incredible 23-year-old woman who has a disability. So as you are building a connection with her, it’s important to acknowledge her disability and look past that and build it with who she is an individual. She’s this incredible, inspiring 23-year-old woman who just happens to be a little bit short.”

But in the wake of all the new coverage, there were a lot more takes coming in over the weekend. Many were supportive, but some were from folks who just couldn’t get past the idea of a grown man being romantically interested in someone who looks especially young, calling it a fetish or even, at worst, just straight-up pedo behavior.

Well, Dan isn’t taking that lying down. Once again, he’s fiercely defending… Shauna. He said in a brand new video on Sunday he’s not backing down from his slow courtship:

“Me and Shauna are still friends getting to know each other.”

He also blasted everyone who would preclude his “friend” from dating by accusing anyone she dated of being a pedophile:

“I think it’s absolutely disgusting the attitude of some people. She’s been through so much in life. She survived cancer as a child, she’s always felt different and been treated different by society. But how dare you take away her right, her human right, to have a connection, a friendship, a relationship with someone else?”

“Who are you to say that she can’t have that? I am absolutely disgusted by some people’s attitudes towards her and my friendship with her. I cannot believe some people who deny her the right to have a friendship or connection with someone else. She is a human being, she is a cancer survivor, she’s got disability, she had dwarfism. Who are you to take away her right to have a friendship and connection with someone? How dare you? How dare you?”

Like we said in our last post, we absolutely agree the poor young woman deserves the right to a love life like anyone else. It’s unfortunate the kind of unique obstacles she’s going to have to deal with while trying. Sadly, she’s always going to have to be extra vigilant for sickos who have an ulterior motive for wanting to date her.

We’re not saying he’s a creep, that’s unfair to her. But what about the other kind of motive that might come with dating a reality star? See, in our opinion, there is something sketchy about the way they met. He reached out to her after seeing her TV show. Red flag. He calls himself a “nomad” and an “entrepreneur.” Red flag. Looking at his Instagram page, he looks like he’s trying to grow into an influencer, and he just started posting on TikTok in October. Red flag. So, is this just about clout-chasing? Well, the controversy is helping. We noticed his IG page is growing by leaps and bounds all of a sudden, with a few thousand more followers just since Friday.

And the video in which he’s so righteously defending her? It’s on his brand new YouTube channel. You can see the full thing (below). Oh, and don’t forget to smash that like button!

We can’t say anything for sure, but we do have to voice our doubts at the sincerity of anyone who shoots his shot with a girl he saw on reality TV. A man can say all the right things, but it doesn’t make him the right guy. And it doesn’t prove he’s always been 100% interested in Shauna as a person. Ultimately, though, it’s up to her to decide who is and who isn’t right for her life.