Britney Spears is “Stronger” than yesterday, continuing with her hardcore workouts at the gym with fiancé Sam Ashgari.

With an end to her conservatorship on the horizon, Britney Spears is keeping the momentum alive! The 39-year-old took to her Instagram on Friday, October 1, to post a high-intensity video of she and soon-to-be-husband, Sam Ashgari, working out together. “My fiancé and I always make time to workout,” she captioned the post. “He’s so strong just like my boys … geez 👀🌹 !!!!”

The “Toxic” singer was wearing a white, long-sleeved shirt she tied up at the waist to show off her perfectly toned abs while donning super short shorts that put her killer gams on display. Underneath her shirt was a hot pink sports bra that paired well with her light pink sneakers. Britney threw up her hair in a messy bun while she worked out, lifting weights for numerous reps as she played an up-tempo beat.

Also featured in the video is Sam, who indeed looks “strong” as ever doing multiple pull-ups on the gym equipment. The 27-year-old wore black athletic shorts and light blue sneakers for the workout. He also wrote, “You must be a lion when you have a lioness ❤️,” in the comments section of Britney’s post, giving his future bride some love.

Britney announced she was engaged to Sam with a September 12 Instagram video, saying she “can’t f**king believe it” in the caption while showing off her gorgeous rock. Sam will be the “Baby One More Time” singer’s third husband, as she was married to Jason Allen Alexander for less than three days in 2004 and married to musician and dancer Kevin Federline, 43, from 2004 to 2007. 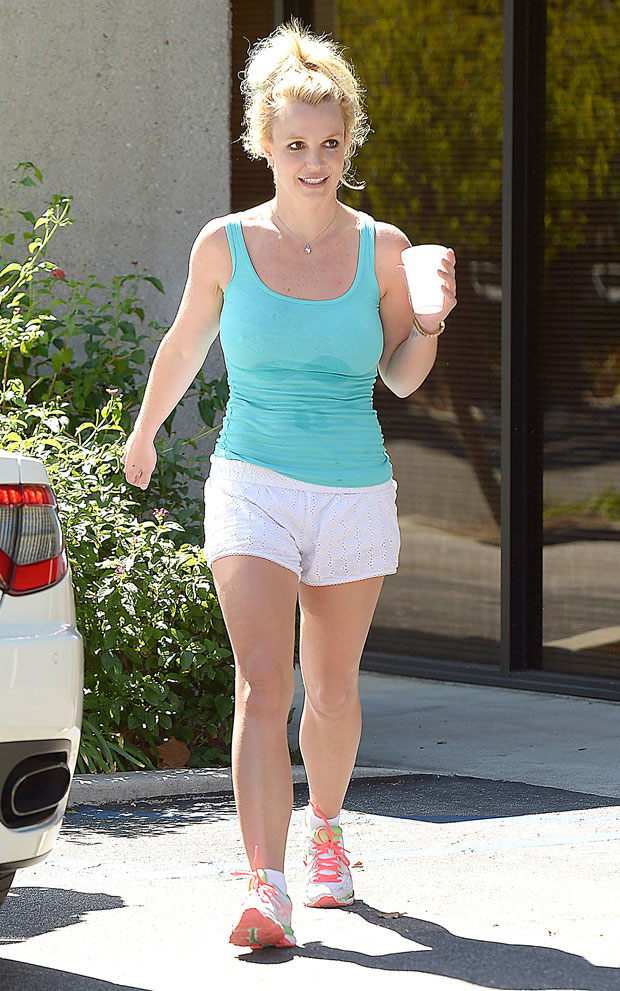 Britney also shares her two sons Sean Preston, 16, and Jayden James, 15, with Kevin. Britney and Sam’s exes both seem to be happy for the both of them, with Sam’s ex-girlfriend, Mayra Veronica, recently sharing that she thinks Sam “hit the jackpot” with Britney. Jason also shared with Inside Edition that while he think’s their engagement isn’t real, he’s happy for them if they are truly engaged. ““If it’s real, it’s awesome,” he said.