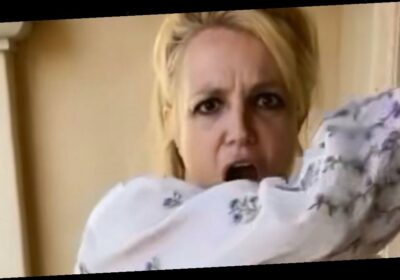 Britney Spears has uploaded a video which spectators believe includes a secret clue about her wellbeing.

The pop sensation shared footage of her changing her outfits with her 3.5 million TikTok followers.

Within her caption, Britney, 39, penned that despite ‘finding her cat suit’ she wasn’t able to ‘find her mask’.

“I found my cat suit,” she wrote with a paw print emoji. “… No luck finding my mask but at least I found my body!!!”

“Stay joyful my friends and do what makes you happy!!!!” the Baby One More Time hit maker finished.

In the comments section of the video, which featured Britney transitioning through outfits, an eagle eyed fan claimed she’d hidden a secret message within her written caption.

The TikTok user explained that they believed Britney was telling the public she had no need to find her mask because she didn’t leave her home.

“Guys, “no luck finding my mask” meaning she doesn’t go outside so there’s no need for a mask, that’s why it’s hard for her to find it.. Omg.. FREE U,” they wrote.

Whereas a different TikToker seemed more concerned about the words Britney wrote about finding her body in the caption.

“ “At least I found my body?” They wrote. “WHAT IS THAT SUPPOSED TO MEAN? IM WORRIED FOR YOU.”

“YALL THIS IS MORSE CODE,” someone else added.

Another onlooker wrote to Britney about finding her freedom: “Girl I am waiting til your free and can finally tell your story I’m so sorry your being trapped … poor girl your so sweet.”

While a fellow Britney fan urged her to send them a message by wearing the colour pink if she was under any threat.

“Britney!!,” they penned alongside a crying emoji. “Wear pink in ur next vid if you need help!!! This is worrying!”

An additional social media user questioned why Britney seemed to always be in the house and urged others to go to her home to release her.

“Why is she just trapped in the house all the time now,” they questioned. “Is there anything stopping us from just meetin up and just marching in there to set her free.”

While Britney lives in a $7.4 million LA mansion with her boyfriend Sam Asghari, her teenage boys live at their dad’s home and reportedly visit their mum every week.

In February the New York Times released Framing Britney Spears, a documentary about her life being under the control of her controversial conservatorship headed up by her dad, Jamie Spears.

The singer broke her silence about the documentary last month claiming she "cried for two weeks" after its release, despite not watching it herself.

Worried Britney fans have been behind the #freebritney movement since 2009 demanding that she be granted the right to manage her fortune and career herself.